The Volvo XC60 T8 hybrid has excellent on-paper economy and even if this is hard to match, its low CO2 emissions make it a good company car.

While any car’s economy will be affected by how you drive it, that’s truer of the Volvo XC60 T8 hybrid than it is of most models. It has five driving modes: AWD, Pure, Hybrid, Power and Off Road. Select Pure and it’ll run on electric power only, giving you a theoretical range of 28 miles. If you’re able to cover your commute within this distance (which, it should be noted, is a maximum figure), you’ll use no petrol at all.

Volvo quotes an official fuel economy figure of 134.5mpg and CO2 emissions of 49g/km for the XC60 T8. This may be possible to achieve if you’re really trying, but we returned around 31mpg during our time with the car. True, we were driving it with brio rather than caution, but that’s a heck of a disparity. Even in Pure mode, if you demand more performance than the 84bhp electric motor can provide, the 2.0-litre petrol engine will kick in, adversely affecting efficiency as it does so. 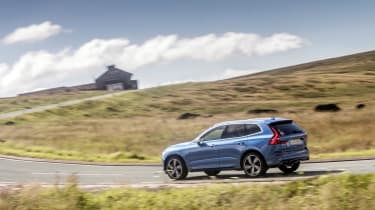 Those after a fast company car will find much to like about the XC60 T8 hybrid, however: its low carbon-dioxide emissions of 49g/km and its petrol engine (diesels get a higher rate) mean you’ll be in for a Benefit-in-Kind band of just 9%. Even when you consider the XC60 T8’s high purchase price, that will leave you with a reasonable tax bill at the end of the year, and few 401bhp cars bring so low a tax obligation.

Road tax will be expensive, however: after the first year of tax (which is typically rolled into a car’s on-the-road price), the T8’s status as a £40,000-plus car means that in addition to the standard rate of £130 for hybrids, you’ll pay an extra £310 a year from years two to six, for a total annual bill of £440. 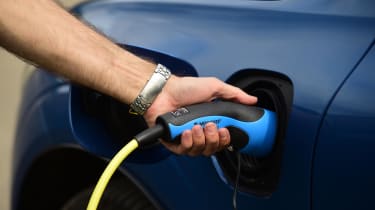 The Volvo XC60 has an electric-only range of 28 miles, and its 10.4kWh (kilowatt hour) batteries take between two-and-a-half to three-and-a-half hours to fully charge up from a fast charger. While fast chargers are relatively simple and inexpensive to have installed at your home, with a conventional three-pin domestic plug the time rises to seven hours. The T8’s charging cable is stored under the boot floor and plugs into a flap on its nearside wing, with the batteries being replenished via the car’s on-board charger.

While the XC60 T8 itself has a fairly average three-year 60,000-mile warranty, Volvo guarantees the battery pack for eight years or 100,000 miles – whichever comes first.

As an expensive and powerful SUV, the XC60 T8 hybrid will be expensive to insure: it sits in group 42 out of 50, so expect high premiums.