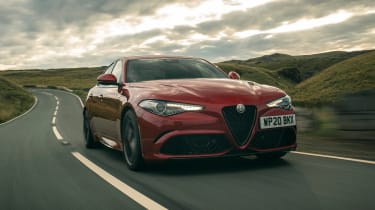 Sitting pretty at the top of the Alfa Romeo Giulia range is the Quadrifoglio, with its 503bhp V6 engine, muscular styling and fantastic driving experience. It’s Alfa’s answer to the BMW M3, Mercedes-AMG C63 S and Audi RS5 Sportback, and sits right at the top of the class for thrills - especially as it was further improved for 2020.

It’s a good time for the updates as, at the time of writing, the next-generation BMW M3 has yet to be launched. The most noticeable update is inside, with higher-quality trim and a much better infotainment system - meaning the cabin now feels as special as the driving experience. The updates don’t transform the Giulia as such, but they do make it even easier to recommend. 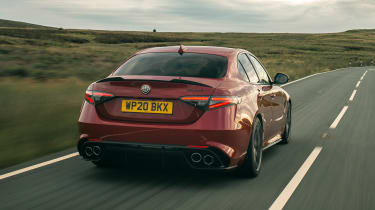 You’d still buy the car first and foremost for the performance. That V6 engine is developed by Ferrari, and enables 0-62mph in under four seconds and a top speed close to some very flashy supercars. Despite the stats, it feels accessible - not least because there’s so much grip.

There’s some distance between the prices of the rest of the Giulia range and the Quadrifoglio but it’s considerably less expensive than the C63 S. You’d struggle to spend less and achieve a similar level of performance, while the styling, engine noise and classy interior all help the Giulia’s case.

Poor fuel economy is the trade-off for so much performance 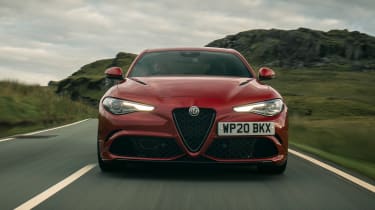 It should go almost without saying that a car like the Alfa Romeo Giulia Quadrifoglio won’t be very good when it comes to fuel economy, but it’s comparable to rivals. An official figure of 27.2mpg is fractionally better than the Mercedes-AMG C63, while the 365bhp Kia Stinger GT-S can only match the 503bhp Alfa Romeo. The all-wheel drive Mercedes-AMG CLA 45 offers similar performance with the promise of 32mpg, however. You’ll also need to stop for fuel a bit more often in the Giulia than the C63, because the Mercedes has a larger tank.

VED (road tax) will cost £475 the first five times you renew it, and after that it drops to £150 a year. A CO2 output of 235g/km means the top-spec Giulia will never occupy anything other than the top BiK band for company-car users. Alfa Romeo offers a five-year warranty, while service plans are available and can be paid monthly or upfront. 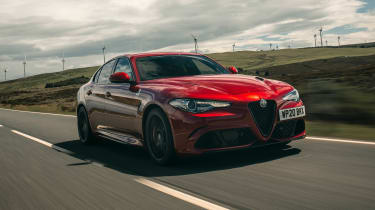 The Quadrifoglio is head and shoulders above the next-fastest Veloce model in terms of performance, thanks to a stunning 2.9-litre V6 petrol engine. It may not sound like a huge engine, but two turbos and Ferrari know-how means it produces 503bhp. Despite not having all-wheel drive, 0-62mph takes a scant 3.9 seconds, and the Giulia goes without the 155mph speed limiter common on most of its rivals, so can reach 191mph. That’s very nearly supercar pace in a comfortable saloon with room for your friends.

You’ll want to rev the engine out at every opportunity to hear the full chorus. It’s addictive, and can be made even louder with an optional Akrapovic sports exhaust system, which is also a tad lighter than the standard set of pipes. 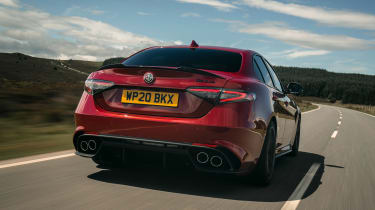 It’s some achievement to make a rear-wheel-drive car with more than 500bhp feel so accessible but the Giulia’s chassis does just that. The rear end can swing out if that’s your intent but there’s a huge amount of confidence-inspiring grip.

Both the steering and the car’s weight are light compared to rivals, which means it turns in keenly and isn’t unstuck by tricky mid-corner bumps. There’s little body roll, even in the more comfortable suspension setting, while the adaptive dampers give a better ride than any of its rivals. It copes with broken tarmac and bumps with ease, giving the impression it was fine-tuned with British roads in mind. 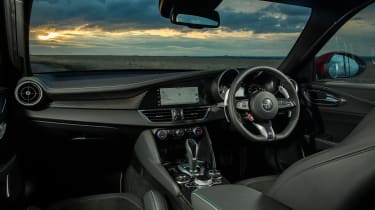 We mentioned how comfortable the Giulia Quadrifoglio is in the last section and refinement has also been improved by extra sound-deadening and a reduction in vibrations. It’s now a much better long-distance GT car, capable of soaking up lots of miles when you’re not exploring everything the engine has to offer.

Interior quality hasn’t historically been the car’s strongest point but Alfa Romeo has focused its efforts inside for the facelift. The cheap-feeling plastic trim, noticeably around the gearlever, has been replaced with carbon fibre, while the infotainment screen is now a touchscreen and features a more intuitive menu as a result. 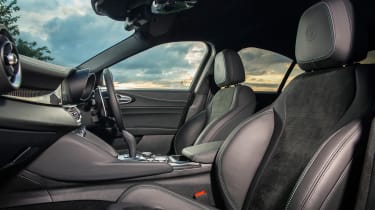 As the flagship model in the Giulia range, the car gets plenty of standard equipment; the Giulia Quadrifoglio brings xenon headlights, 19-inch alloy wheels, active suspension and wireless phone charging. The new touchscreen shows driving stats and the display for the reversing camera, while connectivity is taken care of with Apple CarPlay and Android Auto. Options include an upgraded stereo system and a Driver Assistance pack, plus costly performance-focused extras like the sports exhaust system and carbon-ceramic brake discs.

The Giulia Quadrifoglio is no less practical than the standard model

Those in the front seats are very well catered for, both in terms of tech and space. This is pretty common for saloons but the Giulia offers plenty of space for rear-seat passengers too. With a longer wheelbase than any of its rivals, legroom is generous, and headroom is good despite the sloping roofline. 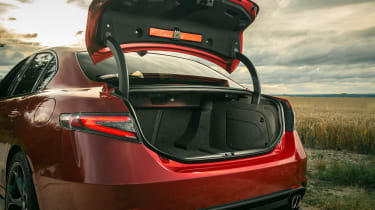 The Giulia Quadrifoglio might have lots more power than the cheapest model but practicality isn’t affected at all. Boot space is identical at 480 litres, which handily matches the BMW 3 Series and Mercedes C-Class. As it’s a saloon, you haven’t got a huge boot opening, and this isn’t helped by a high lip to haul items over. Its rivals - even the BMW M3 - are, or will be, available as an estate, but Alfa Romeo doesn’t sell a Giulia estate. Those that need the versatility of a full tailgate will prefer the Stelvio Quadrifoglio SUV, which packs the same powerful V6 engine.

Safety and owner satisfaction are impressive; reliability is less so 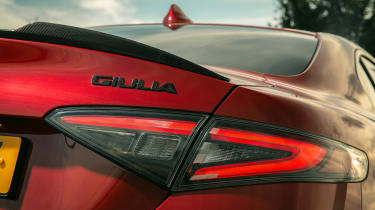 Alfa Romeo owners are mostly happy with their cars, shown by the brand’s strong top-10 finish in our 2020 Driver Power owner survey. It garnered near-universal praise for how its cars drive, and front-seat comfort scores highly too. Reliability is said to be good, but 28.5% of owners reported a fault in the first year, which must be a little concerning for prospective buyers. At least the company offers five years of roadside assistance on most new cars.

Euro NCAP gave the Giulia a five-star rating, and this applies to the Quadrifoglio too. Adult protection was especially impressive, with a 98% score. Autonomous emergency braking, pedestrian detection, blind-spot monitoring and lane-departure warning are all fitted as standard. The £1,500 Driver Assistance Pack Plus option adds a driver attention alert warning, traffic jam assistance, intelligent speed control and adaptive cruise control.