The Alfa Romeo Giulia has the longest wheelbase (the space between the front and back wheels) in its class, and so provides plenty of room inside. It’s genuinely possible to carry four adults in this car without having to make any sacrifices in terms of comfort. 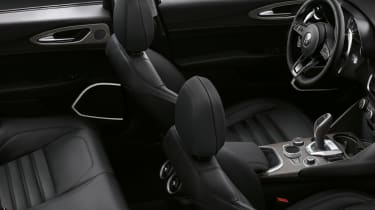 While it’s common for the driver and front-seat passenger to get plenty of space in this class of car, those in the rear often feel like something of an afterthought. Not so in the Giulia: back-seat passengers have plenty of space to stretch out, with generous leg and headroom. The pronounced hump in the floor (under which sit the rear-wheel-drive mechanicals) means legroom is significantly compromised for any middle-seat passenger, though.

The BMW 3 Series does better for interior storage, though, with bigger door bins and places to put your smartphone in the centre console. The facelifted Quadrifoglio version also gets 40:20:40 split-folding rear seats and a third central rear seatbelt to make it almost as family-friendly as the standard trims levels.

The Giulia's 480-litre boot is identical in size to the BMW 3 Series’ and Mercedes C-Class’, and the wide opening makes loading bulky items easy. While the Giulia’s load lip is relatively high, this is a common feature of saloon cars.