Company-car drivers are the biggest buyers of executive saloons, so it’s good to see that the Alfa Romeo Giulia is available with an engine capable of CO2 emissions as low as 135g/km to make Benefit-in-Kind costs relatively easy to stomach. Many of its rivals come with a plug-in hybrid, though, and these offer far lower BiK bands than petrol or diesel models.

All Alfa Romeo Giulias attract road tax of £150 a year, while those with a list price (including options) of more than £40,000 are liable for an additional surcharge of £325 a year in years two to six of ownership, bringing the annual bill to £475 during that period.

Alfa Romeo has a reputation for building excellent petrol engines, and the 197bhp 2.0-litre in the Giulia is no exception to this. The only downside is its economy, which, at up to 34.9mpg, can make the Giulia significantly more expensive to run than either of the diesels if you regularly cover big distances. The 276bhp Veloce model is hardly any less efficient on paper, and officially manages up to 32.5mpg, which is a trade-off for the performance on offer. 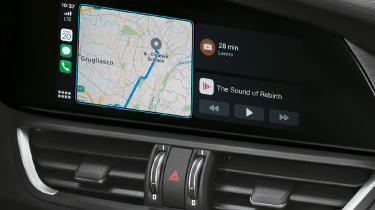 The high-performance 503bhp Quadrifoglio model is the thirstiest in the range, promising up to 27.2mpg according to the WLTP test.

The regular Giulia sits in insurance groups 24-29, which is about par for the course in this class. The high-performance Veloce model sits in group 36, while the Quadrifoglio is unsurprisingly more expensive to cover due to its group 46 rating.

Until late 2018, the Giulia came with Alfa Romeo’s three-year warranty, with unlimited-mileage cover for the first two years and a 100,000-mile cap on the third year. This has now been changed to a '5-3-5' package that includes a five-year/75,000-mile warranty, three years of scheduled servicing and five years of roadside assistance.