Wonderful interior quality, but ride not the smoothest

This is a category in which Audi usually shines and the e-tron is no exception. The present generation of A3 has been with us since 2012 and a lot of very good rivals have been released in the meantime. However, Audi has done a great job of keeping it up-to-date and there are certain A3 features that competing cars can’t equal. 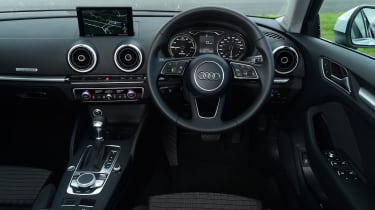 One of those is the optional Virtual Cockpit. This replaces conventional instruments with a screen on which a user-selected choice of information is displayed, including a 3D sat-nav view. It’s a terrific system and gives the familiar A3 dashboard a real lift when it’s installed. The dashboard itself is deserving of the hackneyed phrase ‘hewn from granite’, such is its solid feel. It’s built from really first-class materials and free of rattles and creaks. Better still, it’s a delight to touch, and the same is true of the rest of the interior.

Although Virtual Cockpit is an option, the e-tron does get an infotainment system with a seven-inch colour screen as standard, which incorporates sat nav, DAB radio and Bluetooth. Elsewhere, in keeping with the e-tron’s high-tech appeal, LED headlamps, cruise control and parking sensors are fitted, as is an autonomous braking system with pedestrian detection. Extra-supportive sports seats are fitted, too, visually expressing the e-tron’s performance potential.

Audi cars have come in for criticism for harsh ride quality in the past and it’s true that the present A3 isn’t featherbed-smooth. We think the e-tron’s ride is helped by its extra weight, though, and while jolts caused by cat’s eyes and potholes are still readily felt by passengers, it’s a bumpy, rather than jarring sensation and never really uncomfortable.

With the exception of the Virtual Cockpit, we’d probably not worry about adding many options – the e-tron is already well equipped. It’s also already very expensive. In many ways, the greatest competition for the e-tron is its conventionally powered sister models. Even once the £2,500 Government grant for low-emissions cars is taken into account, the e-tron is still around £4,000 more expensive than a 2.0-litre diesel A3 fitted with the optional DSG automatic gearbox.