Sportback body is good for passengers, but e-tron may struggle with their luggage

The e-tron is only available as the five-door Sportback version of the A3 and this is good news all round. It means that passengers can travel with space to spare and luggage space isn’t entirely forgotten, either.

While those in the front are unlikely to notice much difference between the Sportback and the three-door hatchback, those in the rear will be only too grateful for the increased legroom and headroom afforded by the e-tron’s five-door body, not to mention the greater accessibility afforded by the rear doors.

The A3’s relative narrowness does mean that three’s a crowd, though, and rear centre-seat occupants are in for an uncomfortable journey, with restricted space for their head and feet. There’s also no ISOFIX mounting point for the centre seat. It’s better to consider the Sportback as a generous four-seater rather than a compromised five-seater. There’s plenty of storage space, though – the doors have handy bins, there’s a cubby-hole beneath the front centre armrest and a good-sized glove compartment up front. 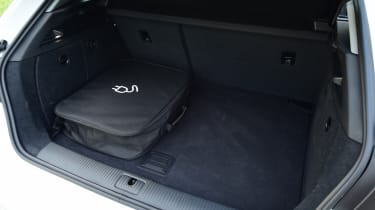 The only sticking point is the e-tron’s slightly reduced boot space. Although the A3 Sportback ordinarily offers a useful boost in space over the three-door A3, the e-tron’s battery pack removes that advantage. With just 280 litres, the e-tron loses 100 litres to the conventional A3. If you’re likely to carry bulky loads often and want to do so economically, you may well be better off with the A3 Sportback diesel.