Lots of power to hand, but driving experience a little vague and unrewarding

The Audi A3 has always been able to tackle demanding corners with impressive pace, but with little of the driver involvement offered by its BMW 1 Series rival. In some ways, the A3 e-tron is further blunted in comparison to its conventionally powered stablemates.

The extra mass of its hybrid system has a noticeable effect on the way the car feels – you’re always aware it’s heavy car and it can feel a little unwieldy in sharp bends where the weight reduces its eagerness to turn into a corner.

The steering still feels accurate and there’s no shortage of grip; the car can be persuaded through corners at considerable speed, but keen drivers are unlikely to find it an experience to savour.

We’re big fans of the 148bhp 1.4-litre TFSI turbocharged petrol engine that the Audi A3 e-tron uses – it provides plenty of power and generally makes any car it’s fitted to enjoyable to drive. In the e-tron, its muscle is boosted still further by the electric motor built into the car’s gearbox, and if the two are allowed to work together, a total of 201bhp is unleashed. 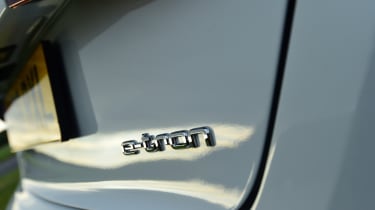 This makes the e-tron a very swift car indeed, managing 0-62mph in 7.6 seconds, but because the battery and motor are pretty heavy, they bring the overall weight of the car to a total of 1,540kg, so the e-tron never feels as quick as those figures suggest. The six-speed S tronic automatic gearbox does a good job of smoothing out the gearchanges so the e-tron behaves just like any other powerful automatic car, however. We did find that when the hybrid battery is low on charge it can cause the gearbox to seem uncertain as to which gear to go for, with hesitance and clunkiness the result.