Quoted MPG very impressive, but achieving it may be tricky

While private buyers are sure to appreciate the e-tron’s increased fuel economy over the regular 1.4-litre TSI petrol model, company-car choosers will be drawn to its low 9% Benefit-in-Kind liability.

Overnight charging with the plug-in cable will need to become a part of your daily routine in order to match Audi’s impressive economy claims for the e-tron. The 166.2mpg figure depends on the battery remaining sufficiently full for the electric motor to perform its duty, and a complete charge takes around two and a quarter hours if you use a wallbox charger, or three hours from a regular domestic three-pin plug.

Achieving that figure will also depend on using the electric motor in preference to the petrol engine wherever possible. Fortunately, the hybrid system offers a 19-mile range, so a low-speed urban commute may be possible in stop-start traffic without the petrol engine being called on. However, if your commute runs on fast, clear roads, it’s likely that you’ll achieve little more than petrol-engine economy.

By way of comparison, the standard A3 1.4-litre TFSI, which uses the same engine as the e-tron, incorporating the same fuel-saving cylinder-deactivation technology, is claimed to return over 60mpg. Audi quotes 70.6mpg for the similarly powerful 2.0-litre TDI diesel. 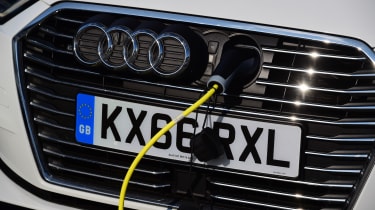 Low official CO2 emissions are one thing the A3 e-tron guarantees. Although its 38g/km quoted figure may also be hard to replicate in the real world, it does assure you of a low 9% Benefit-in-Kind company-car tax liability, even if you never use the hybrid feature.

This means the e-tron will cost less in company-car tax than a 181bhp 2.0-litre A3 Sportback Sport diesel, even though the e-tron’s P11D value is significantly higher than the conventionally fuelled car and the latter may deliver better real-world fuel economy.

Among other cars that enjoy the same BiK ratings, such as the Toyota Prius Plug-In, the Audi is undoubtedly more attractive to own and only Volkswagen comes close to providing as much brand appeal in a similarly powered and sized car with its Golf GTE. However, a similarly hefty purchase price applies here, too – the GTE costs almost as much as the A3 e-tron.

The e-tron doesn’t offer much of a tax advantage to private buyers, although it does qualify for marginally cheaper road tax – as an alternative-fuel vehicle, its annual bill is £130 and it’s also exempt from the London Congestion Charge.

It’s worth bearing in mind that Audi A3 e-tron models can only be sold or maintained by 34 specific Audi Specialist centres in the UK – check for your nearest centre before you decide to buy. When it comes to routine maintenance, costs should be little more expensive than for other petrol-engined A3s and a servicing contract can be arranged to make budgeting easier.

As well as a three year/60,000-mile warranty – which isn’t quite as generous as the three-year/unlimited-mileage policies of BMW and Mercedes – e-tron models have an additional eight-year/100,000-mile warranty against battery failure. The company specifies that a loss of battery capacity of between 10 and 30% is normal and classed as natural degradation and will not qualify for a replacement under warranty.

The A3 e-tron occupies insurance group 33, a rather steep rating that’s higher than the 182bhp 2.0-litre diesel’s group 28, let alone the regular 1.4-litre TSI petrol’s group 19 rating. It’s worth noting that the mechanically similar Volkswagen Golf GTE will be similarly expensive to insure.