"The A3 e-tron is fast and enjoyable to live with, but only if the economics make sense"

The Audi A3 competes directly with the Mercedes A-Class and BMW 1 Series, but steals a march on its premium rivals by offering a hybrid power option in the form of this e-tron version. It wraps its fuel-efficient engine and electric motor combination in a sharp suit of clothes that has proven irresistible to armies of loyal A3 buyers over the years.

The A3 Sportback e-tron provides further proof that you needn’t sacrifice design and luxury in the pursuit of economy and only the Volkswagen Golf GTE plug-in hybrid offers a directly comparable package. 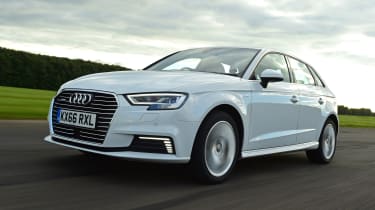 The A3 e-tron is available only in five-door Sportback form and as with the regular Audi A3, it has been kept up to date to conform with Audi’s ‘family’ look, which seems to evolve almost imperceptibly over time. The latest A3s have headlamps with integrated LED daytime running lights and a reshaped grille for a sharper look. The tailgate has also been restyled to fit in with the edgier theme at the front of the car.

The mechanical formula has remained largely unchanged since the e-tron first appeared. You’ll find a familiar 1.4-litre TFSI petrol engine used in other cars from the VW Group, including the Volkswagen Golf, Skoda Octavia and SEAT Leon. Unlike its sister models, though, the 148bhp from the e-tron’s fossil-fuel-burning engine is joined by a clean-running electric motor. When they work together, 201bhp is available, which means plenty of power when you need it.

More reviews for A3 e-tron

It also means the e-tron has the ability to run in zero-emissions, electric-only mode at low speeds, when the battery is sufficiently charged. Full electric-vehicle (EV) mode can be selected, as well as a hybrid mode that automatically switches between petrol and electric power as the car sees fit. You can also tell the car to hold off from using its electric power until you reach a town or city, where low emissions are particularly valued.

Other than its unconventional power supply, the e-tron is pretty much the same as any other Audi A3 Sportback. This means a practical five-door hatchback body with plenty of space for five – although the hybrid system does mean a smaller boot compared to regular petrol or diesel versions. The best aspect of the A3 is preserved, though – a stylish and beautifully crafted interior that uses very high-quality materials.

The e-tron is good to drive, too. Granted, the A3 Sportback isn’t the very sharpest or most rewarding car an enthusiastic driver can take the wheel of and the hybrid’s extra weight does blunt the its responses further. But it’s still a neat and tidy handler, with plenty of grip and not a lot of body lean. 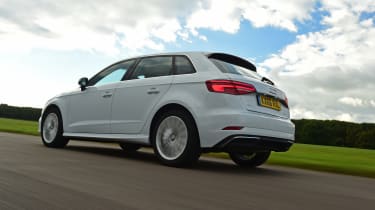 The big sticking point for the e-tron, though, is its price. Fast and enjoyable as it is, the e-tron is more expensive to buy than the performance-focused Audi S3 hot hatchback, which enthusiastic drivers will certainly prefer. The e-tron’s appeal really lies in its low Benefit-in-Kind (BiK) rate, which means a lower company-car tax bill than many other models in the A3 range.