One of the biggest complaints about the old Audi A4 was its rather numb steering. That car didn't exactly feel great to drive, which was why we recommended the BMW 3 Series or Jaguar XE for more enthusiastic drivers.

The latest generation is a big improvement in that regard – the steering is sharper and offers more feel and feedback, but it's still very light.

Although Audi has made the A4's suspension slightly softer and more comfortable than before, there's very little body lean, so you won't get thrown about inside if you go around a roundabout too enthusiastically. It’s still not the outright driver’s choice, though – the A4 feels a bit characterless next to rivals like the BMW 3 Series, Alfa Romeo Giulia and Jaguar XE.

Selecting the optional adaptive suspension system's Comfort mode improves the ride quality further, although whether it's worth spending the extra cash on depends on how much you value a soft ride. We’d recommend the upgrade, as the standard car is noticeably firmer than many of its rivals, especially over rougher roads. S Line trim versions are firmer again, with sports suspension that lowers the car by 23mm. 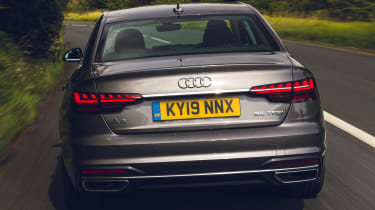 As always, Audi offers its ‘quattro’ four-wheel-drive setup on some models in the A4 range. This ensures there's always enough traction, which could be useful in rain-soaked Britain, but the standard front-wheel-drive version should be more than competent enough for most buyers.

More reviews for A4 saloon

You can choose between a six-speed manual transmission, a seven-speed S tronic dual-clutch automatic gearbox with steering column-mounted shift paddles – or a more conventional eight-speed automatic with the more powerful engines. The S tronic is a particularly good gearbox, offering quick shifts in manual mode and smooth changes in auto mode. It's the only option for most of the range, as the 35 TFSI is the only engine where the manual gearbox is offered.

The Audi A4 petrol range has simplified and been thoroughly worked over. A 148bhp 2.0-litre turbocharged engine called 35 TFSI kicks off the range, joined by two higher-powered versions of the same engine - producing either 187bhp or 242bhp, and badged 40 TFSI and 45 TFSI.

All three engines are very smooth and remarkably quiet on the move and the 40 and 45 TFSI feel fairly potent. Audi predicts the 35 TFSI will be the strongest seller in the range, and it has just enough performance to suit the car, without being hugely thrilling on a fun road.

Three diesel options are now available, all with a capacity of 2.0 litres and fitted with an S tronic dual-clutch automatic gearbox. With either 134bhp, 161bhp or 187bhp, the 2.0-litre engines are badged 30, 35 and 40 TDI respectively and should be powerful enough for most drivers. They boast a smooth power delivery and are quieter than the diesels fitted to the previous A4. We're yet to drive them extensively, but the 35 TDI is likely to be the pick of the bunch, offering reassuring performance when overtaking or driving on the motorway. It gets from 0-62mph in 8.2 seconds with front-wheel drive - quattro is only available for the 40 TDI, where it's fitted as standard.

Above these is the diesel-powered 342bhp Audi S4, which we’ve reviewed separately.