Boot space is the same as the previous model, but there’s much more interior space in the Audi A4

The Audi A4's interior space is much improved over the previous model, while boot space remains the same. The way the car has been designed means passengers in the front and back now have more room than ever.

Since the A4 is wider and longer than before, passengers have more room than ever. The rear seats boast 23mm more legroom, which may not sound like much, but it means that people over six feet tall can now sit comfortably in the back. Headroom is impressive, too – much more generous than you'll find in the Jaguar XE. There's also the usual pair of ISOFIX mounting points for child seats. 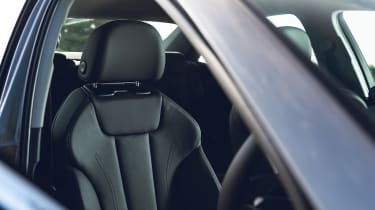 There's loads of adjustment in both the steering wheel and front seats, so you should find it easy to get into position quickly. There are also some big door bins that can swallow large bottles, but the glovebox and central armrest spaces aren't particularly generous.

The A4’s 480-litre boot is identical in size to the BMW 3 Series’ and Mercedes C-Class’. Unsurprisingly for a saloon car, getting larger items into the A4 could be easier, but unlike the C-Class and the 3 Series, the A4 gets folding rear seats as standard.

Stowing them expands the boot volume immensely, and the Audi's seats fold forwards in a versatile 40:20:40 configuration. Like many cars in this class, they don't lie completely flat when dropped, though.