The Audi A4's interior is awash with gadgets and technology, featuring equipment and design ideas from other recently revised Audi models like the Audi TT coupe, Audi R8 supercar and Audi Q7 SUV.

The 2019 facelift means the A4 has even more of this technology as standard, with analogue gauges now a thing of the past. Not every move is positive; the touchscreen-only infotainment system isn't as easy to use while driving as the old control wheel. 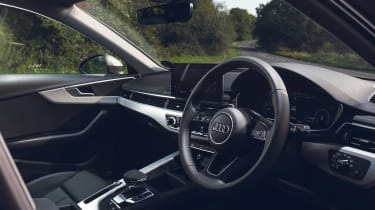 Audi has removed as much clutter from the dashboard as possible in recent years, with the A4 featuring a minimalist layout inside. It also has an incredibly well built interior that just oozes class and sophistication. It's still a more sober design layout you get in the rather flashy Mercedes C-Class, but Audi's penchant for creating classy interiors has been maintained in the A4.

The 'Virtual Cockpit' instrument cluster has been updated and now comes as standard - and it's the best in the business for clarity and ease of use, with all the controls at your fingertips on the steering wheel. The only buttons that remain on the dashboard operate the climate control and essential features. The automatic versions have an aircraft-throttle-like gearlever, which looks smart and doubles as a wrist-rest.

The central vent that's fixed into the dashboard is called an 'air shower'. It's meant to diffuse air gently towards occupants, rather than simply blowing it in your face like traditional air vents.

Audi’s 10.1-inch infotainment system comes as standard, with high-definition graphics and touchscreen operation. After many years, Audi has decided to drop the wheel selector in the centre console, but this feels like a backwards step when driving as it can be tricky to prod the screen on the move. Instead, it's better to use voice commands once on the move.

The built-in sat nav system uses Google Maps and loads with lightning speed, which is partially due to a super-fast processor that gives the most technically advanced computers a run for their money. Overall, it's not quite as user-friendly as the latest BMW iDrive system, but it comes very close. 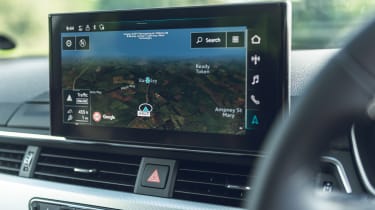 Sport adds bigger wheels and some extra style, which is improved upon again by S line. S line also drops the suspension by 23mm, so be aware it won't ride quite as smoothly - an issue exacerbated by 19-inch wheels. Tinted glass is also added, along with sports seats embossed with the 'S' logo and trimmed in leather and Alcantara.

Options include adaptive cruise control, adaptive dampers, LED 'Matrix' headlights, styling packs and a huge range of accessories. However, they are pricey. A Comfort and Sound Pack bundles features such as keyless entry and a powered boot, a Bang & Olufsen stereo, 360-degree camera view and extended LED lighting around the interior.

The current A4 is the most advanced yet when it comes to technology. Everything is controlled on a slick touchscreen that sits above the air vents. You can also control various functions through the 'Virtual Cockpit' screen that takes the place of traditional dials in the instrument cluster. It's a 12.3-inch screen that comes as standard and allows you to view maps, media functions and other things like the trip computer in place of the analogue dials of older models.

It's an incredibly slick system and, in combination with the bright central screen, makes using the A4 very easy. A colour head-up display also comes fitted to the Vorsprung trim, which appears to hover in the windscreen, making it easier to check your speed and navigation instructions without being distracted from the road ahead. 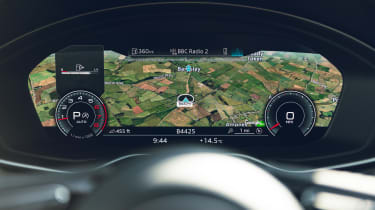 There are various USB ports, SD card slots and auxiliary inputs, so you can listen to music in a variety of ways, as well as over Bluetooth, which is very quick to pair with your phone. The A4 can also come with Audi Connect, which allows you to download apps that can show you the weather forecast, petrol prices and even your Twitter feed, plus the car can act as a wi-fi hotspot for up to eight devices.

The A4 also comes with Apple CarPlay and Android Auto, and the switch to a touchscreen makes these interfaces more natural to use than with the old MMI controller.

A large number of A4s serve as company cars, so a responsive and intuitive sat-nav system is a must. Luckily, the A4's system, as with other VW Group systems, is very easy to use and provides clear, easy-to-follow instructions. You can do multi-route planning as well as using the comprehensive point-of-interest search, which also has access to the internet. This gives you contact details for the destination as well as some information from Wikipedia, which is quite useful.