It's not tops for excitement, but the Audi A6 is a great car in which to take on any journey

The big question is whether the Audi A6 can finally equal or beat the BMW 5 series for driver appeal, and the quick answer is that it gets closer than ever. It's now a close enough comparison that you might want to sample the Audi's handling before picking the 5 Series by default.

The Audi A6 is one of those cars that you can simply step inside and embark on any journey, safe in the knowledge that you'll be fresh and relaxed when you arrive. And it doesn't matter what kind of roads you encounter: the A6 is as relaxing and stress-free to drive on a country road as it is on a heavily congested motorway. Even when fitted with larger wheels and sportier suspension in S line or Black Edition trims, the A6 has good ride quality. It’s particularly impressive at low to medium speeds, where the suspension works well to isolate the car’s body from bumps.

Foolproof handling contributes a great deal to this. The steering isn't exactly alive with sensation but it’s light and quick, with strong grip from the tyres and loads of traction from the quattro four-wheel-drive system, which means you can attack fast corners with confidence. That ability is more geared towards making driving easier and covering distances quickly, though, rather than serving up entertainment. Ironically, the entry-level 40 TDI with standard steering and no 'dynamic assistance' feels the best to drive. A lighter weight means it feels more agile and pure.

Where the A6 also shines is for ride quality, especially when fitted with air suspension. This shrugs off road imperfections as if they weren't there, even when big 19-inch alloy wheels are fitted, but the standard suspension of the entry-level model actually gives the car a slightly more nimble feel, even if it isn't as smooth. The range-topping Vorsprung trim also gets all-wheel steering, where the rear wheels turn slightly in the opposite direction to boost agility, making the A6 feel like a smaller car from behind the wheel. 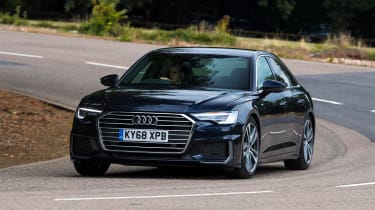 The latest A6 has a slimmed-down range of engines compared to previous generations and diesel takes centre stage. The smallest engine, the 201bhp four-cylinder 40 TDI, is likely to prove plenty fast for most drivers, accelerating the car from 0-62mph in 8.1 seconds and reaching a top speed of 152mph. Above 2,000rpm, it provides an impressive surge of acceleration and fast gearchanges, so it feels anything but slow. While quick, it can't match the turbine-like 3.0-litre V6 50 TDI for outright smoothness. With 282bhp, the latter is very fast, too – 0-62mph is claimed to take just 5.5 seconds. The A6’s diesels are less noisy on the move than those found in its Volvo S90 rival, too.

All are fitted with Audi's 'mild hybrid' technology, which enables the engine to shut down when coasting from cruising speeds (34-99mph is quoted), only to restart when acceleration is required. The system feels unobtrusive and contributes to the car's quiet nature on long journeys.

Previous generations were offered with a petrol equivalent of the entry-level 2.0-litre diesel engine and a new 45 TFSI version of the engine has now been introduced with 242bhp. Only one other 55 TFSI petrol is offered for the core A6 range – a 335bhp 3.0-litre V6 that brings a 5.1-second 0-62mph time. That time tumbles for the S6 and RS6 performance models that we've reviewed separately.