More accommodating than any previous A6, and competes well with rivals for practicality

The previous-generation Audi A6 was never regarded as especially accommodating inside, but the latest model promises a big step forwards. There's a good-size boot, too, although those in search of true versatility would be wise to consider the Audi A6 Avant estate. 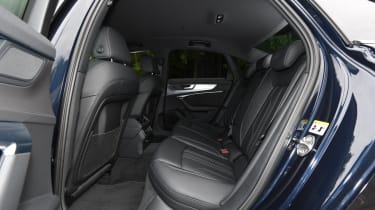 This Audi A6 has grown very slightly compared to its predecessor, but the 7mm increase in length will only be apparent if you're accurate with a tape measure. The inside story, though, is different, and will be noticed immediately if you step out of the old car and into the new.

Compared to the previous generation, the latest Audi A6 has a 12mm longer wheelbase – the distance between the front and rear axles – than before. This is claimed to contribute to a 21mm overall increase in interior length – most apparent in the rear seats.

Audi claims 17mm more rear legroom for the latest A6 than before and a subtly lifted roofline contributes 10mm more headroom for rear-seat occupants as well. Front-seat occupants have little cause for complaint, either – there's plenty of space, lots of seat adjustment and a dashboard design that surrounds passengers without anyone feeling hemmed-in. 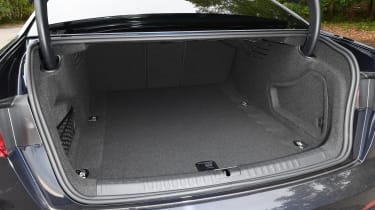 The latest Audi A6 offers 530 litres of boot space – the same as its predecessor. That matches the BMW 5 Series, but falls a little behind the 540 litres of the Mercedes E-Class. There'd be more luggage volume available if it weren't for the mild-hybrid system's underfloor-mounted batteries.