Masses of safety equipment is available, but Audi Q8 owner satisfaction is tricky to predict

There isn't a safety feature in Audi's armory you can't specify on the Q8, either as standard or as an option, and it has a five-star Euro NCAP safety rating. It's trickier to predict owner satisfaction – while the car itself is bound to please, neither its reliability nor Audi's customer service can be assured.

The Q8 is still a fairly new model, which has an unproven reliability and customer satisfaction record. Although it shares much with the Q7 under the surface, it occupies a position in the brand's range that has never previously been filled. Audi having never offered a model quite like this means there's no real precedent when it comes to owner satisfaction.

Audi's standings in our 2019 Driver Power owner satisfaction survey are average at best – it could only achieve 16th place out of 30 brands surveyed. A disappointing statistic is that 21% of owners reported at least one issue with their car during the first year of ownership. Owners weren’t happy with high costs at the dealer network and when arranging their insurance premiums. 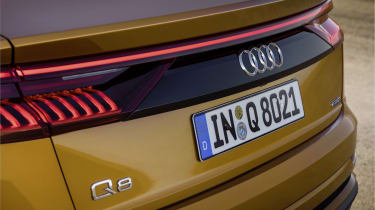 Which of Audi's advanced safety features will be fitted to the Q8 as standard has yet to be confirmed. The company is one of the front-runners in driver-assistance technology, though, and the semi-autonomous systems that underpin the Q8's 'Tour Assistance Package' should significantly reduce driver workload, and therefore fatigue, on long or repetitive journeys.