Physics dictate that a big, heavy SUV like the Audi Q8 will be costly to run

Recent large Audis have demonstrated considerable innovation in fuel-saving technology. Like the A8 saloon, the Q8 is built around a 48v power system, which facilitates mild-hybrid technology, as well as performance-boosting measures such as electric turbocharging. Be under no illusion that the Q8 will be inexpensive to run, though. This is a big, heavy car with a considerable appetite for fuel; maintenance won't be cheap, either.

Claimed fuel-economy figures for the Q8 are not too dissimilar to those of the Audi Q7.

The 3.0-litre 50 TDI Quattro with mild-hybrid technology claims 33.2mpg and produces up to 222-227g/km of CO2 depending on the size of the alloy wheels. A less powerful 45 TDI will follow but it’s unlikely to return vastly improved economy figures.

A high-performance 3.0-litre petrol 55 TFSI model is the only petrol model in the mainstream Q8 line-up; it’s less economical than the diesel, as you’d expect, managing 26.4mpg and CO2 emissions of up to 249g/km. Company-car users will probably have to pay the rate of Benefit-in-Kind (BiK) tax on any model in the Q8 range until a plug-in hybrid e-tron version is introduced.

With every Q8 priced comfortably beyond the £40,000 mark, annual road tax will cost £465 at the end of each of the first five years of ownership, and £145 per year thereafter. 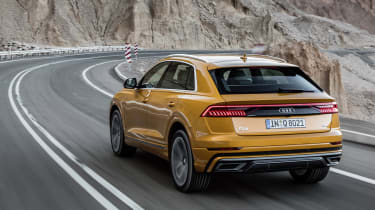 The S line 3.0-litre diesel starts in group 47E. The higher-spec Vorsprung and more powerful 55 TFSI petrol are both insurance group 49E. As you’d expect, the 429bhp SQ8, which we’ve reviewed separately, is rated in the highest insurance group 50E.

The Audi Q8 requires servicing based on either an annual or variable schedule, which you can determine when you take delivery. Annual is intended for low-mileage drivers and those who make frequent short journeys. If you spend a lot of time on the road, a variable schedule might suit – it uses wear sensors and oil-quality evaluation to determine when a service is required, but no longer than two years will ever elapse between services. Audi offers service packages to suit drivers' individual requirements; your dealer will be happy to discuss the most suitable arrangement for you.

Audi's three-year/60,000-mile warranty is less generous than the three-year/unlimited-mileage policies offered by Mercedes and BMW, but can be extended at extra cost. Nevertheless, it still galls that a premium brand with a reputation for quality should offer such a mean warranty, when Toyota, Nissan and Hyundai offer five or more years, with a far more generous mileage limit.