The Audi Q8 offers space for four and plenty of personal possessions, but isn't very versatile

The Q8 takes up just as much space on the road as its less rakishly styled Q7 sister, but is far less of a family holdall. In fact, its inevitable SUV categorisation is a bit of a misnomer – not only is the Q8 not especially sporty, but it falls rather short on utility, too. It's most certainly a vehicle, though, and one that offers a commanding view from the driving seat, which is the big draw of this kind of car.

Like the Q7, the high-riding Q8 requires a bit of physical exertion to climb into, but once you're behind the wheel, it's a very relaxing place to be. Front-seat occupants are well catered for – you sit a little lower than in a Q7, but visibility is still good through the front and side windows. The front seat mechanism offers a huge range of adjustment, as does that for the steering wheel. 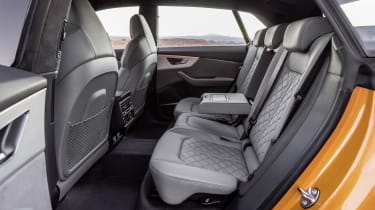 Despite the curvaceous roofline, rear-seat passengers aren't too hard done by, either. Most will find headroom adequate and the wide interior allows plenty of space for elbows. Nor will many complain about a lack of legroom – a tall adult can still sit behind a tall driver without a serious need to splay knees. The Q8's sculpted form rules out a third row of seats, though – this is a strict five-seater.

A five-seater with a big boot, though. The Q8 can't match its seven-seat sister for load space – that car offers 770 litres for your luggage in five-seat mode – but it trumps the BMW X6 for baggage capacity. In fact, the Q8 offers 605 litres – 25 more than its rival. The boot doesn't lend itself to heavy-duty work, though – the svelte lines of the bodywork mean you'd struggle to fit a washing machine in the boot, and bicycles may need to travel on the roof.