Loaded with technology, the Audi Q8 has a world-class interior design

When we tested the Audi Q8 before its UK launch, the only machines available to drive were fitted with a standard air-suspension system. It's impressive: able to soak up road imperfections comfortably, despite the enormous wheels and unyieldingly low-profile tyres fitted across the Q8 range. The default for UK cars, though, is a sports air-suspension system, and we fear it might be less soothing on long journeys than the standard setup. It's possible, though, that the latter could be offered as an option for those who want smoothness rather than sportiness.

Wisely, Audi hasn't given the Q8 an inappropriately sporty interior. Instead, it's a place of relaxing serenity, with a real upmarket air thanks to a very strong flavour of Audi's prestigious A8 executive saloon. It shares that car's central control system, which looks after infotainment and convenience settings through a pair of glossy touchscreens.

The top, 10.1-inch screen is focused on infotainment, while the lower 8.6-inch panel is dedicated heating, ventilation and drive settings. It's through this panel that Audi's handwriting recognition and text input features are handled – its low position puts it within easy reach of your spare hand, although right-handed drivers might struggle with the handwriting recognition feature.

Similarly hi-tech is Audi's Virtual Cockpit instrument panel, which places a full-colour information display in your line of sight in place of conventional dials. The display is fully configurable and can display an array of information, including high-resolution 3D maps. 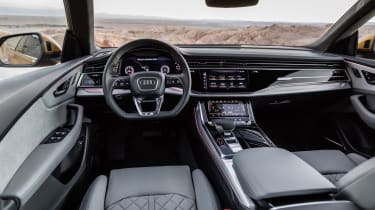 Initially, the Q8 is being offered in a choice of two trim levels. The default is S line – a designation familiar from elsewhere in the Audi range – while the high-end Vorsprung (a German word that means 'taking the lead') acts as flagship.

All the usual niceties – sat nav, climate control, all-round parking sensors, reversing camera and endless other handy features – are standard, along with 21-inch alloy wheels, upholstery in soft Nappa leather and Alcantara suede and full smartphone connectivity with Apple CarPlay and Android Auto. The Vorsprung heaps in yet more equipment, including a heads-up display, Bang & Olufsen stereo and a panoramic roof, as well as 'super sport' seats and a four-wheel steering system.

The Q8 Vorsprung comes with a 'Tour Assist Package'. This is a suite of semi-autonomous driving assistance features, including an advanced active cruise control that not only matches the speed of traffic ahead, but can also interpret approaching hazards – such as corners and roundabouts – and adjust the car's speed accordingly.

There are a number of additional features – including a garage parking pilot system that uses a laser scanner to build a 3D image of your garage to identify things like bicycles and lawnmowers, so it can avoid them when the car is parking itself through its smartphone app.

All these features – and doubtless many, many more – will be offered on the Q8 options list, which will be released in due course.