Those who drive the Audi Q7 tend to find it wieldy and satisfying, rather than responsive and nimble, and its transformation into the Q8 hasn't radically changed things. Even though the Q8 has structural similarities with the astonishing Lamborghini Urus, it has little of the Italian super-SUV's penchant for attacking corners.

Some will think this a pity, but on the other hand, the Audi is a far more accomplished, effortless cruiser than the highly-strung Lamborghini, and motorway prowess is of more importance to most Q8 customers than cornering composure. Among the Q8's greatest strengths, in fact, is its quietness at speed. There's barely a murmur of wind noise thanks to the precisely mounted 'acoustic' glazing, and the engine hums away in the background.

Venture onto a twisty road and the Q8's limits are red-flagged by steering that provides very little feel or physical feedback – its enormous wheels and tyres smother the road surface and suffocate any signals from the road. It's highly unlikely that you'll run out of grip, and high cornering speeds can be achieved, but there's very little fun to be had in doing so.

The BMW X6 is undoubtedly a sharper, more engaging car to drive, but the Q8 is arguably more enjoyable to cover distances in. 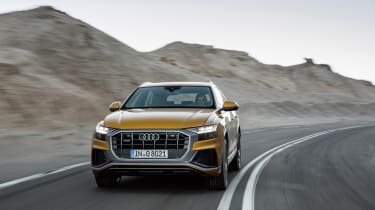 The first diesel powered Audi Q8s on sale have only one engine choice – a 3.0-litre V6 diesel that also does service in the Audi A8. Badged 50 TDI, it uses a 48-volt electrical system to support a mild-hybrid system that enables the engine to shut down in circumstances when little power is required – when cruising on a downhill section of motorway, for example.

With 282bhp, the 50 TDI can accelerate from 0-62mph in 6.3 seconds on its way to a top speed of 152mph. A less powerful version of the same engine – badged 45 TDI – will follow next year. The most powerful diesel model is the SQ8, taking only 4.8 seconds to accelerate from 0-62mph on the way to an electronically limited top speed of 155mph. Every Q8 is equipped with Audi's quattro four-wheel-drive system and the standard eight-speed automatic gearbox is smooth and responsive when you shift manually using the steering-wheel-mounted paddles.

The 3.0-litre V6 petrol model badged the 55 TFSI generates 335bhp and can get from 0-62mph in 5.9 seconds before reaching a top speed of 155mph. If you want even more power, then it's worth considering the forthcoming RS Q8, which will top the range with 592bhp.