The most spacious Continental GT yet, but far from being truly versatile

Despite being a similar length from tip to tail as its predecessor, the latest Continental has its front and rear wheels further apart, which has liberated extra interior space. However, it's still very much a car with its driver and front-seat passenger's interests at heart; rear-seat occupants aren't extended quite the same degree of courtesy.

The original Bentley Continental GT invited its driver and partner to take a long, fast trip with enough luggage to enjoy their destination. While those in the front were provided ample room to stretch out, its rear seats were rather better suited to younger or smaller occupants on short or occasional journeys. The same is largely true of the latest model, but an increase in internal length has made those rear seats rather more useful, even if a Mercedes S-Class Coupe is more generous in this regard. 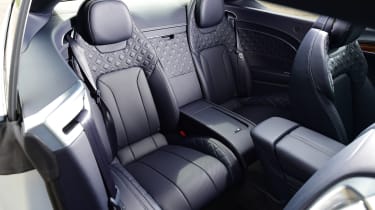 The car is now more deserving of its four-seater billing, although any larger passenger might feel rather more coccooned than is comfortable. Space is still tight, but far more tolerable than before, although the steeply sloping roofline means headroom is at a premium for taller rear-seat occupants.

Fittingly, a common unit of boot space measurement among cars like this is the 'set of golf clubs', which the latest Continental GT should easily accommodate. At 358 litres, its boot is actually slightly smaller than that of the previous model in total volume and it suffers a similarly high bulkhead over which loads must be lifted. 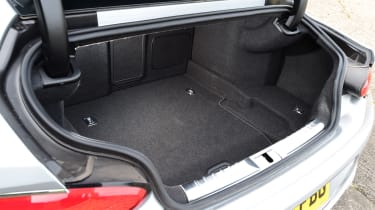 It has a more usable shape than the boot of the original Continental GT, though, with a slightly wider aperture that makes those golf clubs easier to lug in and out. There's also a handy ski hatch that makes it possible to carry longer items. Positioned centrally, it doesn't cost any rear-seat capacity when in use, but passengers will have to share their centre armrest room with your skis.

Bentley doesn't provide towing figures for the Continental GT and its predecessor was never claimed as suitable for use as a tow car. In light of its design, complex exhaust system and suspension setup, we'd recommend against attempting to fit a tow bar.