At the top of the Continental GT range, you’ll still find a massive 6.0-litre W12 twin-turbocharged petrol engine, and it’s the engine that arrived first. It will suit buyers who simply want the ultimate Bentley experience, but many buyers are likely to be more interested in the smaller V8. Despite the difference in capacity, both engines share a decidedly 'healthy' thirst for fuel.

While it’s never going to be anything but thirsty, the W12 engine in this Continental is actually brand new, rather than carried over from the previous generation. It comes with an up-to-date, eight-speed dual-clutch automatic gearbox, helping to improve efficiency. Not only that, but it also features cylinder-deactivation technology that saves fuel by shutting down part of the engine when you don’t need it. This coaxes an official economy figure of 20.8mpg from the W12 and CO2 emissions of 308g/km. 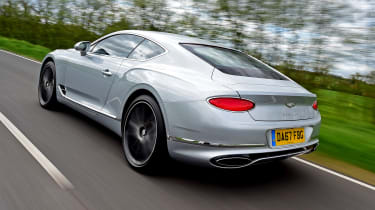 The V8 model claims fuel economy of 23.3mpg with CO2 emissions of just over 270g/km, so the difference between the W12 is negligible. Both versions are comfortably in the top BiK band for anyone brave enough to run either of them as a company car. The Continental GT costs £150 a year to tax, with a surcharge of £325 in years two to six taking the total to £475 in that time.

You’ll most likely be on first-name terms with your insurance broker if you’re planning to cover a new Continental GT, and needless to say, it’s likely to sit in group 50 – the most expensive position.

Every Bentley comes with a three-year/unlimited-mileage warranty, which is fairly standard for the class, matching the cover for an Aston Martin DB11 and Mercedes-AMG GT.

After investing in a Bentley, you’re likely to want to keep it in good shape and worth as much as possible. Official Bentley services are recommended annually (or after 10,000 miles) and include genuine replacement Bentley parts that get their own two-year warranty. It’s likely to be quite pricey, though, and it might surprise many to note that Ferrari maintenance is free for the first seven years of ownership.