You're looking at a very different Bentley to the Continental that launched in 2010, which was itself still heavily based on the 2003 model. Not only is this one said to be 100% new, it also shares its underpinnings with the Porsche Panamera, granting access to the latest manufacturing and chassis technology.

One criticism of the old W12 was that it was rather nose-heavy, but the latest engine is not only lighter, it has also been pushed 150mm further back in the chassis – significantly improving weight distribution. Air suspension is standard, along with a new 48-volt ‘roll control system’ that automatically adjusts the stiffness of the anti-roll bars to improve handling in corners, without ruining ride quality – a system first developed for the high-riding Bentley Bentayga SUV. Comfort, Bentley and Sport driving modes also adjust the suspension, engine, exhaust and steering to suit the occasion at hand. 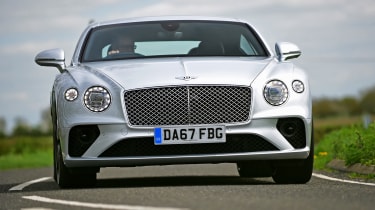 Four-wheel drive is standard and in Comfort mode the majority of engine torque is sent to the rear wheels, for a secure feel and to save fuel. If the road conditions change, or the driver ups the pace, more thrust can be sent to the front wheels almost instantaneously to aid traction and stability. That’s unless you select Sport mode, because doing so limits power to the front axle to just 17% and sharpens the suspension, gearbox, engine and exhaust to make the heavy Bentley appear to shrink and behave like a leather-clad Nissan GT-R on a race track. It’s an impressive transformation, and one that owners of the old car are likely to be bowled over by. However, Sport is a little too firm for all but the smoothest tarmac, so you may find yourself doing most of your driving in the default 'Bentley' mode, so named because it's the one favoured by the car’s engineers. Here, the suspension is impressively refined, but the new eight-speed gearbox can still get caught out by sudden bursts of acceleration.

The Continental GT launched with a completely reworked version of Bentley’s legendary 6.0-litre W12 engine, complete with twin turbochargers that give it a colossal 626bhp. Bentley engines have always been the opposite of the high-revving screamers in Ferraris and Lamborghinis, and peak torque is delivered from just 1,350rpm – barely above idle. This gives the Bentley its character; a slight press of the accelerator sees it launch forwards with a deep bellow from its exhaust, despite the fact it weighs well over two tonnes. The intention is that its performance feels entirely effortless, and it certainly works.

Acceleration from 0-60mph takes 3.6 seconds and a top speed of 207mph is enough to put the Aston Martin DB11 in the shade, as well as many light aircraft. It isn’t quite as rabid as the shrill Ferrari 812 Superfast, though, which has evolved into more of a razor-sharp supercar than a grand tourer.

The turbocharged 4.0-litre V8 engine in the Continental GT V8 model produces 542bhp and gets the car from 0-62mph in 3.9 seconds before pushing it to a top speed of 198mph. The difference, then, between the V8 and W12 in straight-line performance terms is tiny, and in corners the lighter V8 model actually feels more agile. While both cars sound spectacular under full throttle, the deep, thunderous rumble of the V8, particularly in Sport mode, is essentially and gloriously unique - there isn't even another V8 engine that sounds quite the same. It's rich in bass and burbles gently when you lift off the throttle, without emitting loud antisocial pops and bangs. The V8 model has the performance, sound and sense of occasion to make the W12 very difficult to justify.