The BMW 5 Series is competitively spacious 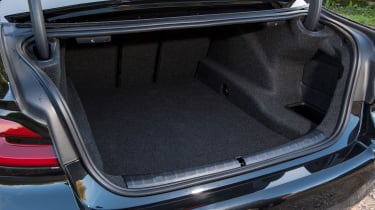 As a large executive saloon, the BMW 5 Series acquits itself well here. Neither front nor rear-seat passengers will want for room, while the size of the boot is roughly on par with those of the Mercedes E-Class, Jaguar XF and Audi A6. Although there's a trend of family buyers moving to SUVs, the 5 Series is better to drive than almost any SUV on the market and has no real disadvantages in terms of spaciousness or practicality.

The 5 Series has an interior that has generally been well thought through. As with most cars of this class, anyone in the middle rear seat will be forced to splay their legs around a pronounced floor hump. Head, leg and elbow room, though, are all extremely generous and the 5 Series is up there with the best when it comes to interior space. A long journey in the 5 Series with four six-foot tall adults can be embarked upon with confidence.

Cup-holders, door bins, the glovebox and the central cubbyhole are all of a good size and there's also a space to wirelessly charge the Display Key or your mobile phone. 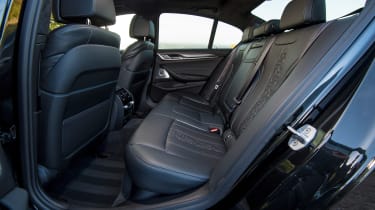 The 5 Series has a 530-litre boot with a wide aperture and a lower loading lip than before, although there’s a fair bit of intrusion from the wheelarches and it’s not quite as square a shape as we’d like. The Jaguar XF and Mercedes E-Class offer 10 litres more space and, while this difference is negligible, it must be said the E-Class’ boot in particular is a better shape.

Specifying the ‘through-loading system’ for around £330 gives you folding rear seats to accommodate longer or bulkier loads. An opening ski hatch behind the rear armrest costs a further £75 or so. It’s also important to note the boot capacity is reduced to 410 litres in the 530e plug-in hybrid owing to extra components, including the battery pack.

We don't have official towing limits for the updated 5 Series yet but the old car could pull between 2,200kg and 2,500kg depending on which model you choose; we expect the latest 5 Series to be similarly capable. A folding tow bar is around £850, although it’s worth knowing the 530e plug-in hybrid isn't suitable for towing.