Some things may have changed with the latest BMW 5 Series, but it remains best-in-class for driver involvement 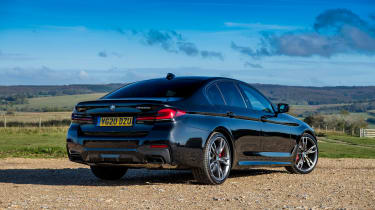 BMW’s historical marketing tagline ‘the ultimate driving machine’ may seem rather presumptive and arrogant, but the 5 Series validates it. No other executive car is quite so able to switch seamlessly between effortless long-distance cruising and stimulating B-road entertainment, so however you want to drive it, the 5 Series obliges. The plug-in hybrid versions aren't quite as much fun, largely because of the weight of their batteries, but they're still perfectly competent.

While passengers are insulated from the outside world, with barely a whisper of wind noise and a suspension system that absorbs all but the most vicious of road imperfections, the 5 Series driver is always in their element, too. Whichever model you choose, body control is superb, with little lean in corners and steering that provides plenty of feel and feedback to inspire confidence. In standard form, the car is lighter than its closest rival, the Audi A6, by around 100kg, which makes for sprightly handling and acceleration.

Although all models feel incredibly agile, the optional four-wheel steering and adjustable suspension takes things even further, enabling comfort or sportiness to be prioritised according to preference. The xDrive four-wheel drive system adds extra traction that you’ll feel most pronouncedly when cornering hard in slippery bends – that it reduces the 5 Series propensity to oversteer will be seen as either a virtue or a vice to enthusiastic drivers, depending on their point of view.

The lack of a manual gearbox option may seem like heresy from a brand like BMW, but in truth it’s a mark of changing consumer tastes: the extra convenience and economy offered by modern automatics makes them the default choice in this class of car and the eight-speed automatic perfectly suits the 5 Series’ character. The Sport version of this gearbox is even faster, although it remains plenty smooth enough as well.

The latest 2.0-litre 187bhp 520d is plenty fast enough from 0-62mph for most drivers, taking an impressive 7.2 seconds. This is roughly a second faster than the Mercedes E 200 d, on a par with the more expensive E 220 d; and such acceleration should be more than adequate for most. The engine is a bit gruff when compared directly to its rivals from Audi and Volvo, but it’s not lacking in the performance stakes.

Upgrade to the BMW 530d xDrive and you also get four-wheel drive. The 530d produces seemingly endless power, going from 0-62mph in just 5.4 seconds and accelerating with a similar ferocity when overtaking on motorways as it does when moving off from a standstill. 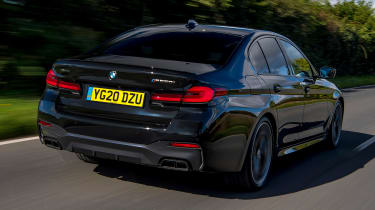 The entry-level petrol 5 Series is the 181bhp 2.0-litre 520i, which reaches 62mph in 7.9 seconds and comes with rear-wheel drive and a standard eight-speed automatic gearbox.

A high-performance M550i xDrive model was introduced towards the end of 2020, which shares its 4.4-litre V8 twin-turbocharged engine with the BMW 8 Series. It's essentially a detuned M5 engine, but with 532bhp it's still incredibly powerful. Acceleration from 0-62mph takes just 3.8 seconds and it will reach a top speed of 155mph with ease.

The 530e was joined by a 545e xDrive plug-in hybrid for the first time in autumn of 2020. The big news here is the upgrade to a six-cylinder petrol engine, resulting in a significant power hike to 387bhp. The 0-62mph time is slashed to 4.6 seconds but it also feels more potent in everyday driving.

The 545e can start and pull away in electric power, even accelerating up to motorway speeds without the petrol engine kicking in. But when it does, the six-cylinder is tuneful and free-revving. Enter your destination into the navigation, and clever tech will work out where in the journey to best use electric or hybrid power, smoothly juggling them in the background.