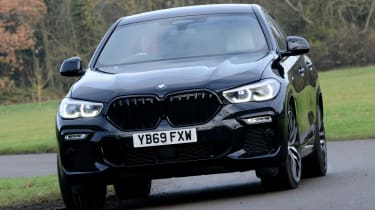 Despite the fact it's an SUV, the X6 is clearly tilted in the direction of performance and this is borne out by its fuel efficiency. This won't be a cheap car to run, particularly in M Performance forms, and servicing and insurance costs are also likely to be pricey. 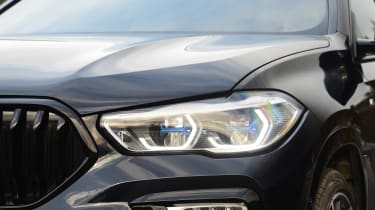 Most BMW X6 drivers are likely to rack up motorway miles, so while diesel may be falling out of favour for smaller cars, many are still likely to favour the 30d version of the X6 because of its fuel-efficiency of up to 42.8mpg. This is helped by mild-hybrid technology, which harvests energy as the X6 slows down and then uses it to power the electrics and assist the diesel engine under acceleration. With CO2 emissions from 172g/km upwards, no version of the X6 is exactly cheap for company-car drivers paying Benefit-in-Kind tax. The M50d sees economy drop to a maximum of 34.4mpg, while CO2 emissions range from 216-222g/km depending on specification.

Choose and X6 with a petrol engine and the xDrive 40i can manage up to 28.5mpg if you take it gently, but the V8-powered M50i is thirstier still, seeing this figure plummet to around 23mpg. Costing well over £40,000, every version of the X6 will cost £475 to tax in the first five renewal years, dropping to £150 thereafter.

There's no confirmation of the X6's official insurance ratings yet, but we expect it to be in the more expensive groups. Fast, expensive and complicated SUVs don't tend to be cheap to cover, and the rivalling Mercedes GLE is in groups 35 to 50 out of 50.

BMW provides a fairly rudimentary three-year warranty but at least there's no mileage cap during this period. This is on a par with rivals like Mercedes, and slightly more generous than Volkswagen or Audi.

BMWs have on-board sensors which monitor the vehicle and dictate when a service is due, depending on how it's driven and its condition. Servicing plans are available from the dealership to help spread the cost of maintenance equally over a few years.