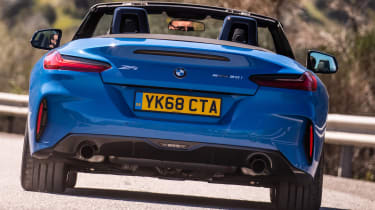 The BMW Z4 won't be a cheap car to run. In its favour are the fact that desirability will doubtless lead to impressive residual values, which means you should get a big chunk of your money back when it comes time to sell. Potential fuel economy seems reasonable, especially for less powerful versions. However, insurance and ongoing maintenance will be little less costly than any other sports car.

BMW claims that the range-topping Z4 M40i can manage up to 33.6mpg but in reality this is more of a target than an average. A car like this brings a constant temptation to make use of all its ample power, and frequent fast acceleration will result in fuel economy figures somewhat less impressive than those calculated under the official WLTP test procedure. You may find yourself topping up the small 52-litre fuel tank quite frequently.

The same caveat applies equally to the less powerful models. The sDrive30i and sDrive20i are claimed to achieve up to 38.7mpg and 39.8mpg respectively, but these figures are just as likely to tumble when the Z4 is treated like a sports car. Driven gently, however, neither are much less fuel-efficient than a normal family hatchback.

Those who can have a Z4 as a company car will pay the top Benefit-in-Kind (BiK) tax for the six-cylinder M40i and a slightly lower rate for both of the two four-cylinder models – CO2 emissions are just over 190g/km for the M40i and 162-171g/km for the sDrive20i and sDrive30i.

Only the entry-level sDrive20i comes in below the £40,000 threshold, above which a higher £475 rate of annual road tax applies. That figure drops to £150 from the sixth year of registration onwards – the same figure as levied against sub-£40,000 cars from new. 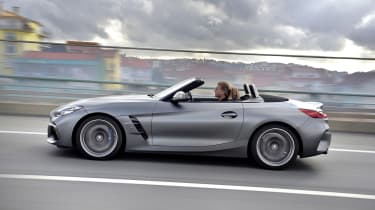 The Association of British Insurers (ABI) has placed the BMW Z4 in groups 30-31 for the sDrive20i, which is reasonable for a sports car. The sDrive30i moves up to groups 33-34, while the M40i is in group 37. By comparison, the Porsche Boxster S – a car that's exactly as fast as the BMW – is rated group 46. That same rating also applies to the Alpine A110.

Every BMW is serviced on a condition-based system, which uses wear and oil-quality sensors to determine when an oil change is due. Most drivers will find it necessary to visit a BMW workshop either annually or every other year. BMW servicing costs are generally on a par with other premium brands and compare well against Porsche; your dealer can organise a service contract to suit your requirements to make it easy to keep track of routine maintenance charges.

As with any sporty car, it's worth remembering that you'll face big bills for brakes, tyres and other consumable parts, especially if you make frequent use of the Z4's performance.

BMW provides a three-year/unlimited mileage warranty on every new car sold in the UK. That's a match for Mercedes and Porsche and beats that offered by Audi. You can extend your BMW's warranty when it runs out. There are a number of levels of cover but each stipulates that your car has no more than 100,000 miles on the clock at the time of policy purchase.