The Dacia Sandero hatchback is fairly simple, but owners have had some reliability concerns

Dacia’s parent company, Renault, has a very good reputation for building safe cars that perform well in Euro NCAP crash tests, and although it’s built on a budget and consequently has less hi-tech safety equipment than rivals, the Sandero does well when you consider its price.

The Dacia Sandero was rated poorly for reliability in our 2018 Driver Power owner satisfaction survey of cars currently on sale in the UK. Of the owners who responded, 24.3% reported experiencing a problem with their car at least once. It didn’t appear in our 2020 survey.

Of these, the most common area for faults was the electrics. Perhaps unsurprisingly, Dacia owners who completed our survey were by far the most positive about its running costs, while refinement, handling, infotainment and the exterior brought the score down. The news was less positive about Dacia as a brand though: it finished bottom of 30 brands in our 2020 manufacturer list. 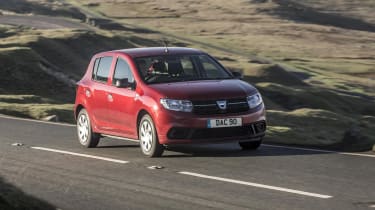 After a poor initial result, the Sandero was re-tested by crash test experts Euro NCAP in 2013, when it was upgraded from three to four stars out of a possible five. This might make you think twice when five-star ratings are so common these days, but it’s important to remember the Dacia’s low cost, in light of which it hasn’t done badly. It scored an impressive 80% for adult protection, and 79% for child occupant protection.

If you won't consider a car with less than a five-star Euro NCAP rating, the SEAT Mii, Volkswagen up! and Skoda Citigo are the cheapest new cars to receive this accolade, but they’re all smaller and more expensive than the Sandero.