The Dacia Sandero is cheap to buy, run and insure

The Dacia Sandero mixes old and new technology, but it works well in its favour delivering decent running costs. It might be based on an old generation of Renault Clio, but the Sandero’s engines are fitted to the latest Renault Clio supermini.

Dacia revised the Sandero engine line-up in early 2020, with a new dual-fuel petrol/LPG engine replacing the discontinued Blue dCi diesel engine. The entry-level 1.0-litre SCe 75 petrol engine is naturally aspirated (non-turbocharged), and is capable of up to 48.7mpg and CO2 emissions of 129-131g/km, making it an affordable option for company-car drivers with a mid-range Benefit in Kind (BiK) tax rating.

The more expensive 0.9-litre TCe turbocharged petrol is a far more advanced engine and manages similar fuel economy numbers, with a claimed figure of 47mpg. It has a 134g/km CO2 emissions figure but it still manages to fall into an affordable BiK tax band.

The TCe 100 Bi-Fuel 1.0-litre petrol/LPG engine costs around £1,000 more than the most basic petrol engine. It’s the most economical Sandero capable of 49.5mpg and emissions of 128g/km possible when running on petrol. Switching to LPG is similarly economical, with up to 39.7mpg and emissions of 116g/km. This model is fitted with a 32-litre LPG tank in the spare wheel recess, making it capable of a decent amount of range between fuel stops.

Every Sandero registered from 1 April 2017 will incur a yearly road-tax charge of £150. 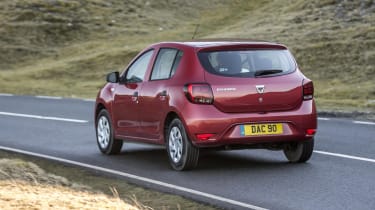 A low purchase price means the Sandero is cheap to insure. The 1.0-litre petrol in Access trim sits in insurance group three or four (out of 50, depending on trim level) while the more powerful TCe 90 models attract a group 10 rating. The TCe 100 Bi-Fuel falls between these two models, sitting in group five regardless of specification.

Dacia offers a standard three-year/60,000-mile warranty with the Sandero. There’s an option to extend it at extra cost to four or five years with the same mileage limit, or to a six-year/80,000-mile or seven-year/100,000-mile policy.

There are plenty of rival models that provide much longer warranties as standard, such as the Kia Picanto or Rio, which have seven-year/100,000-mile packages. The Hyundai i20 has a five-year/unlimited-mileage policy and the Toyota Aygo is covered for five years or 100,000 miles.

The Sandero requires servicing once a year or every 12,000 miles, whichever comes sooner. A service plan is also available to cover the first three years or 36,000 miles of servicing. Your Dacia dealer will advise you of the right service plan for your needs