"The Fiat 500L Wagon (previously the 500L MPW) is the biggest version of the 500L, with a huge boot and room for seven inside" 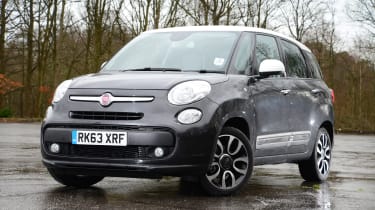 The Fiat 500L Wagon is a larger version of the Fiat 500L and was originally named the Fiat 500L MPW. It’s a bit longer than the 500L and has seven seats. The boot is much bigger, too, by about 240 litres. While the Fiat 500L rivals the Ford B-MAX, this Wagon version rivals the larger Ford C-MAX and even cars like the seven-seater Renault Grand Scenic.

As with its stablemates, the Wagon is offered with a range of accessories such as upgraded wheels, colours and interior trim to personalise the car to the buyer’s tastes. It’s available in two specifications – Pop Star and Lounge – with the higher spec getting tinted windows, automatic wipers and 16-inch alloy wheels as standard, as well as a panoramic roof that allows light to flood the interior.

Smallest engines are frugal but underpowered

Although there are some frugal entry-level engines available for the 500L Wagon, they aren’t the best ones to go for. The 1.3-litre diesel returns up to 72.4mpg, and its 104g/km CO2 emissions figure means a reasonable 22% Benefit-in-Kind (BiK) company-car tax rating. However, we don't think it's really powerful enough to carry a family and all its clobber.

The best engine to choose if you make regular long journeys is the 1.6-litre Multijet diesel, which sees a respectable 67.3mpg and feels powerful enough, although 112g/km of CO2 means 24% BiK. If you're likely to make lots of shorter, urban journeys, you may find the 1.4-litre T-Jet petrol more suitable, although it only claims to return 43mpg and faces a rather high 30% BiK rating. 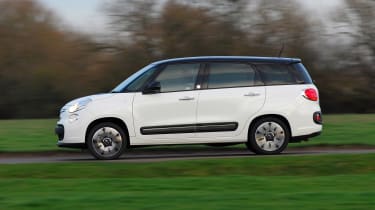 Of course, you'll have to shell out for maintenance, but there's a simple way of doing this. Fiat offers an 'Easy Care' package which will cover all your 500L Wagon’s servicing for the first three years of its life, including all parts and labour. 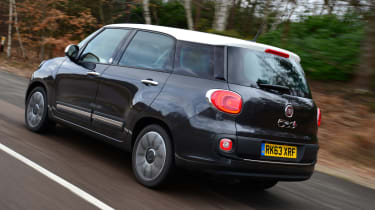 The Ford Grand C-MAX is more fun to drive, whereas the Wagon feels engineered to be safe and predictable – but that’s exactly what most MPV buyers are after. The 500L Wagon is also the most compact seven-seat car you can buy, which makes it easier to drive around tight city streets and park in tight gaps.

A soft and comfy ride

The 500L Wagon is set up for comfort, so it comes with soft suspension and supportive seats – though if you choose the seven-seat version, remember you won’t be able to fit adults in the very back. You may notice the occasional jolt from a pothole or railway level crossing, but on the whole the MPW soaks up rough roads really well. 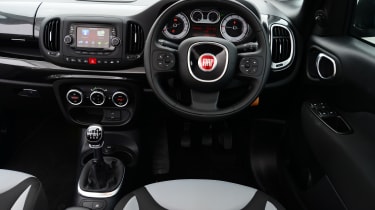 If you’re travelling on the motorway, it bounces gently up and down with the road, making it a pretty relaxing long-distance cruiser. The cabin is also well insulated from all outside noise. You can’t really hear the wind rushing past at high speeds, nor do you get much noise from the tyres rolling along the road surface.

The 2017 facelift introduced a number of new features to the 500L, including Android Auto and Apple CarPlay functionality on Lounge models, which also benefit from a panoramic sunroof, dual-zone climate control and electric rear windows.

The Fiat 500L Wagon is a bit longer than the normal Fiat 500L and can be fitted with seven seats, should you need to carry more people. There’s not much room back there and anyone other than small children will find it hard to fit in comfortably. 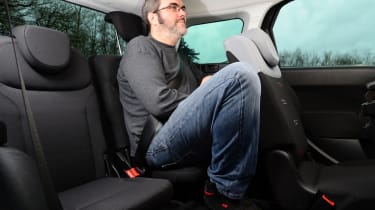 The boot isn’t bad, though, holding 493 litres with five seats in place and pushed as far forward as they'll go. That reduces to 168 litres with all seven seats in place – but fold all five rear seats flat and you end up with a huge 1,509 litres of space. Moving the seats back and forth, as well as in and out of the car, is also very easy, so the 500L Wagon is definitely practical family transport.

The Fiat 500L wasn't featured in our 2017 Driver Power satisfaction survey as too few owners participated. In fact, the sole Fiat model to come under scrutiny was the Fiat 500 hatchback, which came 45th out of 75 cars featured. The Fiat brand finished in 17th place overall, with owners citing reliability among their concerns – 12.1% reported having suffered at least one fault in the first year of ownership. On the plus side, owners enjoyed the technology and style of their cars.

The standard Fiat 500L received the maximum five stars in the Euro NCAP crash safety tests, though the test gets tougher every year, and it’s been a while since the Fiat was put through its paces. Standard safety equipment includes driver, passenger, side and window airbags, anti-lock brakes and traction control. There's also an optional system that will detect an imminent low-speed collision and automatically brake the car to avoid it.

Plenty of standard equipment, but 500L is better value

Many will feel that the extra money asked for the seven-seat 500L Wagon is well worth spending over the regular 500L, thanks to the versatility its extra accommodation provides. However, it's worth asking how likely you really are to use that small third row of seats – if you can get away with five seats, the 500L is already a fairly practical machine.

With air-conditioning for both driver and passenger, a Bluetooth phone connection, five-inch touchscreen and alloy wheels as standard, equipment is fairly comprehensive across the range. It's a bit disappointing, though, that autonomous emergency braking is only available as part of an optional safety package. 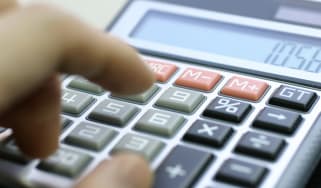 The seven-seat Fiat 500L MPW is now on sale, costing from £15,795
Skip to ContentSkip to Footer