"The Fiesta Active adds hints of SUV style, strength and substance to the standard model without compromising comfort or driving fun" 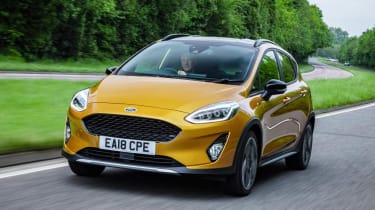 The latest Ford Fiesta has a huge task ahead of it. Not only must it assert itself against ever-improving rivals such as the SEAT Ibiza, Volkswagen Polo and Peugeot 208, but it’s responsible for securing Ford's presence at the forefront of the supermini market for many years to come. Little wonder, then, that Ford has pulled out all the stops to ensure that its longest-running nameplate appeals to as wide an audience as possible.

The drive for maximum appeal has spawned the Fiesta Active. While Ford already offers small crossover SUVs in the shape of the Ford EcoSport and now the Ford Puma, it recognises that not everybody wants to leave the familiar surroundings of a supermini. Combining the essence of both types of car is therefore a pretty sound idea, and the Ford Fiesta Active is steadily gaining more and more rugged-looking rivals - like the Dacia Sandero Stepway, the Audi A1 Citycarver and the upcoming Honda Jazz Crosstar.

Embellished with 17-inch alloy wheels, tough-looking body cladding and a matching grille, the Fiesta Active certainly looks the part, and it comes as no big surprise that the car is positioned near the top of the Fiesta range. In fact, a premium of around £1,500 over the well equipped Fiesta Titanium means it's priced similarly to the EcoSport. So, why choose the Fiesta?

One major reason is that the Fiesta Active is as good as the standard Fiesta inside, and that puts it above the lacklustre EcoSport in quality terms. Today's Fiesta is more plush inside than ever before, and more spacious too, even if the finish isn't quite on a par with the Volkswagen Polo.

Another reason is the way it drives. The Active's raised ride height hasn't hasn’t majorly affected the Fiesta’s agile, perky feel, which is something the EcoSport can’t match - although the Puma is one of the best-driving SUVs and not much more expensive. The Active gets a more sophisticated rear suspension design, and its slightly raised suspension has also improved ride comfort, helping take the sting out of sharp bumps. 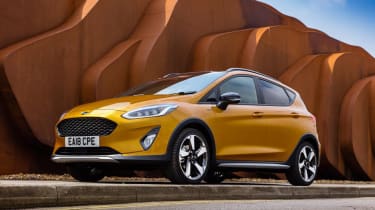 Where the Fiesta Active really excels, though, is its utility. Yes, its SUV style really is only skin deep, but those rugged black mouldings around the wheelarches and front bumper are ideally placed to fend off scrapes. This is a car far more likely to tackle trips to school and the supermarket than one that will be venturing off the beaten track very often. The latter is still possible to a limited extent – the Active's raised suspension and clever 'slippery' driving mode means a damp campsite or field should present little challenge.

When it comes to owner satisfaction, the latest Fiesta is lower than you’d expect given it’s the UK’s best-selling car, and Ford's 24th-place finish out of 30 brands isn’t exactly exceptional either. However, with a five-star safety rating from Euro NCAP, the Fiesta is a sound family choice, and the practical, good-looking Active could be just the car you need to tackle the urban jungle.

Since its SUV looks are essentially cosmetic, Fiesta Active buyers should face running costs that are virtually identical to a standard Fiesta with the same engine. You can choose from the same 1.0-litre EcoBoost petrol engines, with even the most powerful 138bhp petrol claiming 51.4mpg with CO2 emissions as low as 123g/km. Both the 94bhp and 123bhp versions offer up to 55.4mpg and emissions of 116g/km, which means a respectable Benefit-in-Kind (BiK) rate for business users.

There's a sizeable economy penalty if you want or need an automatic gearbox; the six-speed auto is only offered with a 99bhp petrol, where it returns just 42.2mpg. CO2 emissions are much higher at 150g/km, which is almost as high as the 197bhp Fiesta ST.

If you prefer diesel power, there’s an 84bhp 1.5-litre TDCi engine. Ford claims 65.7mpg, with CO2 emissions at a relatively low 112g/km. As this engine doesn’t meet the very latest RDE2 emissions regulations, business users will pay more in tax than on the petrols. The diesel is likely to be a small market for private buyers, too, as it’s more expensive to buy than the petrol engines.

Sharing an identical mechanical package to any other Fiesta, regular maintenance should be relatively affordable. The tyre size is common to many other small crossover models, and parts such as brake linings, that are subjected to wear and tear, shouldn’t be expensive. Ford offers service packages that make it easier to budget for routine work, and Ford's workshop network is one of the largest in the country. Meanwhile, annual road tax will cost £150, just like any other Fiesta.

There are no real mechanical differences between the Fiesta Active and the rest of the Fiesta range, but its suspension has been modified for an 18mm higher ride height. A quick glance at a ruler will demonstrate that 18mm isn't a massive difference, but one which still has the potential to cause a fine-handling car like the Fiesta to feel top-heavy and prone to lean.

Fortunately, Ford has adapted the spring rates and shock absorber settings to account for the extra height, and the Active really doesn't feel any less agile or responsive than the regular Fiesta. Given the Fiesta sits at the very top of the supermini class when it comes to sheer fun to drive, this is excellent news.

There is marginally more lean in corners, but the ride is marginally smoother too and this means the tall Active has a slightly more relaxing feel than its lower-riding sisters. The car still grips doggedly in corners, and a wide track (the distance between the left and right wheels) means it never feels short on stability. 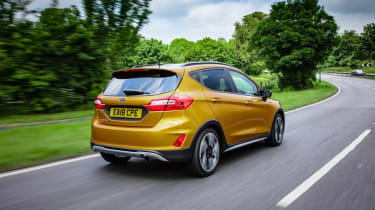 The Active doesn’t lack power either, especially with the 138bhp 1.0-litre EcoBoost engine (offered on the Active X) that was previously reserved for the range-topping Vignale and sporty ST-line models. Most drivers will be content with the 94 or 123bhp versions of the same engine; the performance potential of the 138bhp version is only really noticeable when you push it hard. It takes nine seconds to hit 0-62mph, compared to 12.7 seconds for the 94bhp engine and 10 seconds for the second of the three. The diesel engines, meanwhile, have a solid slug of pulling power but don't feel quite as vibrant and enthusiastic as the petrols. Zero-to-62mph is pretty leisurely with this engine, too, at 12.6 seconds.

It's worth mentioning the Active's selectable driving modes, too – particularly its special 'slippery' setting. This special configuration makes adjustments to the steering and traction control with the aim of maximising traction on treacherous surfaces. Combine this with the slight increase in height and the Active gives you far more confidence in a damp, grassy car park than a conventional Fiesta could.

Leap out of a conventional Fiesta and into an Active and it's a case of 'spot the difference'. The internal architecture is unchanged between the two cars, but you might appreciate the contrasting trim highlights on the dash and seats that add a bit of visual interest.

The dashboard itself doesn't match that of the Peugeot 208 for visual flair or Volkswagen Polo for elegance, but it's the most cohesive Fiesta dashboard yet and very easy to use. The dash is dominated by an eight-inch display for Ford's SYNC3 infotainment system, which offers sat nav plus Apple CarPlay and Android Auto connectivity. You also get cruise control, rear parking sensors, LED ambient lighting and power-folding door mirrors. 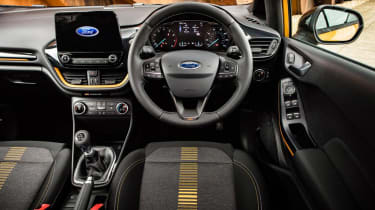 The Active X adds part leather for the seat upholstery, and you get a 4.2-inch colour display between the speedometer and rev counter, as well as auto high beam, a B&O sound system and keyless entry. Generally, Active's standard equipment mirrors that of the Titanium trim for the Fiesta, and the Active X matches the Titanium X. The price premium that Active models command goes mostly on the butch exterior looks and clever traction control software.

Style aside, a big advantage the Active brings is a ride that's rather more cushioned than that of the regular Fiesta, thanks largely to the extra suspension travel. It's still not quite enough to beat the Volkswagen Polo for ride comfort, though.

A spacious feeling inside, and the Fiesta Active is easy to manoeuvre

Although its exterior hints at SUV toughness, the Active is no more intimidating to drive than any other Fiesta, and Ford's supermini has always been much-loved for its ease of driving. The controls are light and progressive, and a tight turning circle makes urban manoeuvres a doddle. The view out of the rear windscreen isn't the most expansive, but the Active pair have parking sensors to help with that. 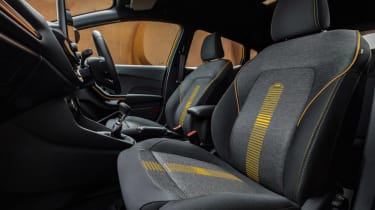 The previous generation Fiesta was marked down for its lack of interior space, but the latest version is a big improvement and the Active is the same. Unlike other Fiesta models, the Active is only available in five-door form, so every passenger has easy access to their seat. Five adults can fit at a pinch but any Fiesta will be more comfortable for a young family, as children will be quite at home on the rear seats.

The Active's 18mm ride height increase isn't enough to bring the commanding driving position that SUVs are famed for, and the Ford EcoSport undoubtedly has the edge in that respect. However, the occupants of an EcoSport face a rather more upright seating position, and the Fiesta's seats offer a far more relaxed posture. Headroom isn't as generous as it is in the EcoSport, but the Active provides plenty of interior storage, with a one-litre central storage bin and a half-litre bottle space in each rear door. 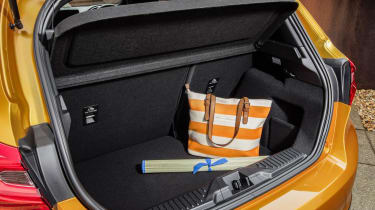 Where the latest Fiesta didn't really change compared to its predecessor is on load capacity. The Active's boot can take 311 litres of luggage, rising to 1,093 litres if you fold the rear seats down.

The Fiesta Active is based on trusted technology

The latest Ford Fiesta finished 71st in our Driver Power list of the top 75 cars on sale, which is quite a disappointing result - and one that is at odds with the Fiesta’s popularity. Its driving experience, running costs and infotainment was praised, but customers weren’t so keen on its practicality, safety features and styling. Of all the respondents, 17.3% reported a fault in the first year of ownership.

There's plenty of room for improvement across the Ford range when it comes to keeping the customer happy. As a whole, the brand placed 24th out of 30 manufacturers in our 2020 survey, and the positives broadly reflect the Fiesta’s. 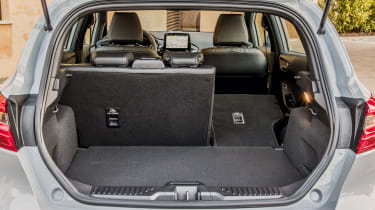 The Fiesta was awarded five stars in crash testing by independent experts Euro NCAP, and the Active will claim the same rating as it's essentially the same car. Adult crash protection was given an 87% score, and the way the Active protects children in a crash was only rated marginally lower at 84%.

The Active's similarity to the Fiesta means it gets the same safety technology, too, with lane keeping assistance and lane departure warning standard across the range. The Active X adds automatic headlights and wipers, as well as traffic sign recognition. It's rather a shame that autonomous emergency braking isn't standard, though – it's an option on every model. This is one reason that the Fiesta's Euro NCAP rating for driver assistance systems is a middling 60%. 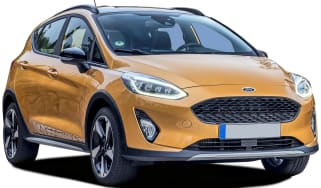