“The Ford Fiesta has been a huge hit thanks to its excellent handling, economy and affordability. With an all-new version arriving soon, be quick if you want one”

If you’re in the market for a supermini, the only reason the current Ford Fiesta shouldn’t be on your shortlist is if you’re waiting for the all-new one to arrive. If you want the latest in-car technology it could be wise to hold off, but if you simply love the current version, there should be some great deals as it heads out of production.

Like any car, the Fiesta isn’t perfect in every area, with a smaller boot and interior than some rivals like the practical Skoda Fabia and a less upmarket feel than the Volkswagen Polo. Its outdated infotainment system has also come in for criticism, with lots of fiddly buttons due to be replaced by a touchscreen with Ford’s intuitive SYNC 3 system in the new model.

But the Fiesta is stylish, great to drive and comes with some excellent engines – particularly the 1.0-litre EcoBoost petrol. It’s also easy to get hold of and maintain, thanks to almost every town in the UK having a Ford dealership.

Two body styles are available, with either three or five doors, and we’d recommend the latter if you plan on carrying passengers, as they make it much easier to use the rear seats. 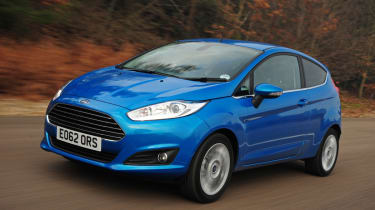 With such a large number of Fiestas sold every month, the engine range is fairly broad to accommodate a wide range of customers. We recommend the 1.0-litre EcoBoost three-cylinder petrol, which is an award-winning engine and comes with either 99, 123 or 138bhp. If you drive more than 12,000 miles each year or mainly drive on the motorway, the 1.5-litre diesel could be a better choice; we’d stick to the 94bhp model.

The Ford Fiesta ST gets a turbocharged 1.6-litre and is renowned as one of the best hot hatchbacks available, which we’ve reviewed separately. If you love the looks of the ST but not its running costs, the Fiesta ST-Line has a similar style, but with engines from the regular line-up.

If you’re after the lowest running costs, the 1.5-litre diesel ECOnetic model with stop-start and 94bhp can return up to 88.3mpg, while emitting 82g/km of CO2. While every Fiesta costs £140 in annual road tax, this makes it very thrifty and will suit company-car drivers, thanks to its 18% Benefit-in-Kind (BiK) rating.

The 1.0-litre EcoBoost is cheaper to buy than the diesel and returns up to 65.7mpg with either 99 or 123bhp, while the top version sees this drop slightly to 62.8mpg. A BiK band of just 16% is also attractive for business customers. 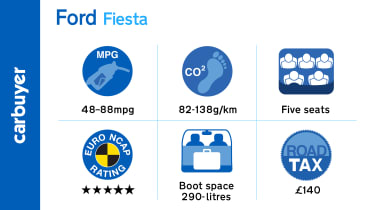 Take to the road and the Fiesta really shines, providing precise steering and sharp responses with hardly any body lean through corners. If you enjoy driving, it’s sure to satisfy you, and even if you just use it as a runaround, its agility and grip still add to its ease of driving and safety. With a relatively taut ride, the Fiesta loses a small amount of a comfort, so the Volkswagen Polo might make a better cruiser, but the Fiesta has been tuned specifically to cope with UK roads.

With the launch of the Ford Ka+ budget supermini, the entry-level Style and Studio Fiesta trim levels have been dropped to avoid too much overlap. The Zetec trim is now the first rung on the latter, and it’s well equipped with DAB radio, Bluetooth, a heated windscreen and air-conditioning.

Despite its age, most of the Fiesta’s design still looks fairly fresh, but its dashboard is starting to seem cluttered next to rivals. If you want the latest in-car tech, you’ll be better off waiting for the new Fiesta to arrive with a touchscreen and Ford’s SYNC 3 infotainment system.

It’s a similar story with safety, because the all-new Fiesta promises sophisticated kit to help prevent accidents. The current model was one of the safest cars in its class when it launched, however, with a five-star score from Euro NCAP in 2012. Autonomous emergency braking (which Ford calls Active City Stop) is a £200 option across the range.

The Ford Fiesta finished 50th out of the 75 cars ranked in our 2017 Driver Power owner satisfaction survey of cars currently on sale in the UK.