The Ford Fiesta is not the most practical of small hatchbacks, with a small boot and cramped rear seats

If there's one area where the Ford Fiesta fails to hold a decisive advantage over its rivals, it's practicality. It's not that the Ford is cramped; it just can't match models such as the Nissan Note, Skoda Fabia or Kia Rio hatchback for all-round space.

The Fiesta's dimensions are pretty much par for the course for this type of car. It's more-or-less identical in length and width to the Vauxhall Corsa and Volkswagen Polo. That means it's easy to park and will fit in a single garage with plenty of space to spare.

Taller passengers will find head and legroom a little tight in the back, while access to the rear seats is limited in three-door models, despite front seats that tilt and slide forward. The five-door model is much better in this respect, thanks to its wide-opening rear doors. 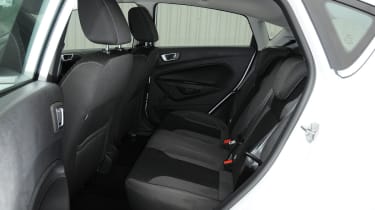 As you'd expect from a car aimed at families, the Fiesta's interior is full of useful storage spaces. The front doors get decent-sized pockets capable of carrying one-litre water bottles, plus there's a large glovebox and plenty of useful cubbies for various odds and ends. The centre console also gets a pair of large cup-holders, while ST-Line models and above get a deep, lidded storage box that doubles up as an armrest for the driver and front-seat passenger. 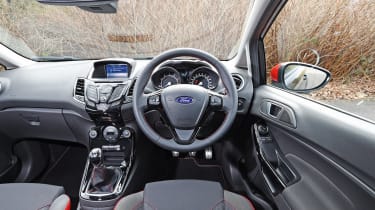 Both versions have a large bootlid that features a wide opening a reasonably low loading lip. There's also a well shaped 290-litre boot, which can be extended to 974 litres by folding the rear seats down flat. The Fiesta's boot is fractionally larger than the Vauxhall Corsa's and Volkswagen Polo's, although the Corsa trumps both when its seats are folded down. 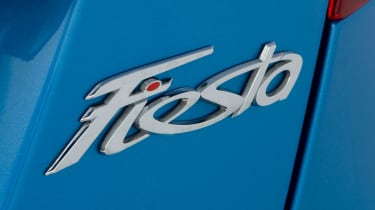 The rear seats split and fold 60:40, meaning two can travel in the back while the third seat is folded for longer items. It's worth remembering that, as in the Peugeot 208 and Toyota Yaris, the seats don't fold down fully flat.

We'd recommend choosing the optional £100 space-saving spare wheel over a foam-based tyre repair system, even though it reduces boot space.