The Ford Fiesta’s safety credentials are faultless and quality is good, but owners are lukewarm on reliability

The Ford Fiesta rounded out the top 50 in our 2017 survey and less than 5% of owners experienced an issue in the first year of ownership. Elsewhere, the Fiesta put in solid results.

The Ford Fiesta was rated average for reliability in our 2017 Driver Power owner satisfaction survey of cars currently on sale in the UK. Of the owners who responded, 4.7% reported experiencing a problem with their car at least once.

Electrical gremlins were the most frequent problem and while owners reported issues with practicality and exterior trim, the Fiesta received mostly positive feedback elsewhere. 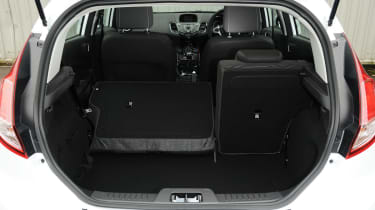 The Ford Fiesta achieved a five-star safety rating in the Euro NCAP crash tests carried out in 2012, outperforming the Volkswagen Polo and Renault Clio by a few percent in most areas.

All models come with seven airbags, electronic stability control and anti-lock brakes. Ford's Active City Stop system is an optional £200 extra, too. This will automatically brake the car if it detects a crash is imminent.

Other clever features include MyKey, which allows parents to programme a special key for young drivers that reduces the car's maximum speed and prevents the stereo from being turned up too loud. Ford Emergency Assistance can automatically alert the emergency services in the event of a crash and is fitted as standard to Titanium models.