Running costs are low for most models and the Ford Fiesta is affordable to service, too

You expect a small car to be cheap to run, and the Ford Fiesta doesn’t disappoint. There's a wide range of petrol and diesel engines, and many emit less than 100g/km of CO2. According to Ford’s figures, more than 65mpg is possible in the most popular versions, while every version of the Fiesta costs £140 in annual road tax.

For those seeking maximum fuel economy, the ECOnetic versions of the Fiesta, fitted with the 1.5-litre TDCi diesel engine, are the best bet. They boast CO2 emissions of just 82g/km and claimed fuel economy of more than 88mpg. But even without the extra fuel-saving features of ECOnetic models, Ford claims every diesel Fiesta is capable of more than 78mpg.

Most small hatchbacks like the Fiesta are used for short journeys, where the 1.0-litre EcoBoost petrol will be a better bet. A number of different versions are available, and both the 98 and 123bhp engines emit less than 100g/km of CO2, making them ideal for company-car drivers, thanks to their low 16% Benefit-in-Kind (BiK) rating. 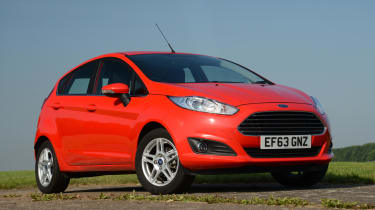 When fitted with stop-start technology – and most models are – the Fiesta's engine automatically shuts off when you roll to a stop, improving fuel economy and reducing CO2 emissions. 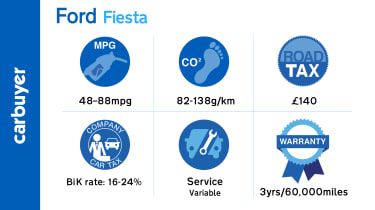 The 1.0 and 1.25-litre petrol engines offer the most affordable way into Fiesta ownership. But given the larger engine in particular is less efficient, we'd recommend spending a little more to buy a 1.0-litre EcoBoost model.

The worst performers in the line-up are the Ford Fiesta ST and Ford Fiesta automatic with the 1.6-litre petrol engine – both of which emit around 138g/km of CO2 and will struggle to better 40mpg in real-world conditions.

Our experts also predict that after three years, the Fiesta should have retained around 40% of its value, which is about average for this type of car.

Ford Fiesta insurance ratings start at group six for the most basic model, but most fall between nine and 12, with the sporty Titanium X EcoBoost models peaking at 16. In general, you'll pay more to insure a Fiesta than you would for a Vauxhall Corsa or Hyundai i20.

Like all Fords, the Fiesta gets a three-year/60,000-mile warranty. However, it's possible to extend this to four or five years for £150 and £260 respectively. Even so, that still leaves it trailing the Kia Rio's seven-year guarantee.

With hundreds of dealers to choose from, finding someone to maintain your Fiesta won't be difficult. And like VW and Kia, Ford offers a pre-paid servicing package – although at £340 for two years or £550 for three years, it's a little pricey.