No other small hatchback can match the Ford Fiesta for driving fun and the 1.0-litre EcoBoost engine is thrilling

You don't have to be a wannabe racing driver to appreciate the way the Ford Fiesta drives. Its steering provides a direct, connected feel with the road, making it nimble and fun to drive, bearing comparison with the original MINI.

Easy-to-use controls and good visibility make the Fiesta a confidence-inspiring partner around town, while a smooth ride and a quiet interior mean it never feels out of its depth on the motorway – although it's not quite as quiet or composed here as the VW Polo.

The 1.25 and 1.6-litre petrol engines show their age and sound a little strained on the move. The 1.25-litre engine comes with 80bhp and takes a pedestrian 13.3 seconds to go from 0-62mph. The 1.6-litre, which is only available with an automatic gearbox, goes from 0-62mph in 10.5 seconds. All three get noisy at motorway speeds.

We'd ignore these in favour of the hugely impressive 98 and 123bhp 1.0-litre EcoBoost petrols, which are both quiet and eager. Despite their tiny size, both of these engines use clever technology to produce the power of a much larger engine. You can expect 0-62mph times of 11.2 and 9.4 seconds for the 98 and 123bhp models respectively. They're very refined and make overtaking easy and safe. 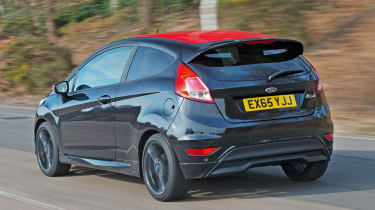 A third EcoBoost model boasts 138bhp and is the quickest of the standard Fiestas – only the sporty Ford Fiesta ST is faster. It features in the ST-Line model as well as the Fiesta Red and Fiesta Black editions and comes with slightly firmer sports suspension. It emits a nice sound under quick acceleration, but settles down to a hushed hum on the motorway.

The fourth and final 1.0-litre engine is the entry-level 79bhp version. With no turbocharger, it takes a lengthy 14.9 seconds to reach 62mph from a standstill and you need to work the manual gearbox hard to achieve that. 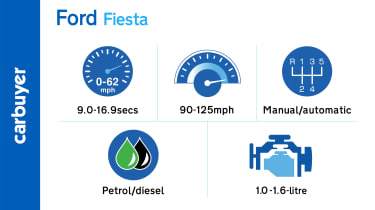 You can boost the power of either the 123 and 138bhp EcoBoost engines to 163bhp with a Mountune MR165 aftermarket upgrade. Priced at just under £1,400, the kit includes several upgraded engine parts and boosts the 0-62mph time to 7.2 seconds. It also makes the EcoBoost engine feel less strained and more refined than it does as standard.

There’s now only one diesel engine in the Fiesta range: a 1.5-litre TDCi. However, it's available in two power outputs. We’d recommend the most powerful 93bhp version. It can do 0-62mph in a reasonable 10.9 seconds, compared with the the 73bhp version's 13.5 seconds.

All versions get a five-speed manual gearbox as standard, which feels light and easy to use, while the Ford Fiesta ST gets a slick six-speed manual. There's also the option of a smooth-shifting six-speed automatic – although it’s only available with the 98bhp EcoBoost and ageing 1.6-litre petrol.

Whatever version of the Ford Fiesta you choose, you'll benefit from the same excellent driving position, which gives a wide range of seat and steering-wheel adjustment, plus excellent visibility.