The Ford Fiesta ST lives up to its reputation; it’s both fast and great fun to drive

Fans of the previous Ford Ford Fiesta ST won’t be disappointed with the latest model, despite its numerous mechanical changes; this is a hot hatch that does everything right. Its smaller engine lacks the character of the four-cylinder found in its predecessor, but there’s still more than enough low-down punch, an eagerness to rev and a suitably sporty exhaust note. Some rivals offer a more traditional four-cylinder engine, but those looking for great performance will not be left wanting by the Ford’s three-cylinder – which itself is lighter and therefore helps towards a better-handling machine.

Driving the Fiesta ST isn’t so much about the car’s engine but more about its fantastic handling. The ST is sharp and responsive, with quick steering that feels well matched to the available grip. Those wanting to make fast, unfussy progress will be able to drive cross-country at a blistering pace, but the ST can also be thoroughly entertaining if you’re a keen driver trying to enjoy the road for its own sake. It features a clever suspension setup that firms up during hard cornering but relaxes slightly when cruising. 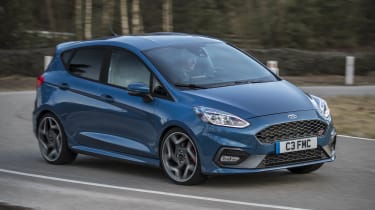 Add the optional Performance Pack (costing around £900) and you’ll benefit from a limited-slip differential made by specialist company Quaife; this helps the ST put its power down more convincingly, especially when exiting corners, limiting excessive wheelspin. Launch control also comes as part of the pack, making fast getaways a breeze, along with shift lights to let you know when best to change gear.

The Ford Fiesta ST is powered by a 1.5-litre EcoBoost petrol engine with three cylinders, one turbocharger and plenty of power - 197bhp, plus extra low-down power when the standard overboost feature kicks in. The 0-62mph sprint takes 6.5 seconds and the car’s top speed is 144mph. The engine feels strong, producing a suitably rorty exhaust note that’s helped along by Ford’s Electronic Sound Enhancement, which uses the car’s stereo to further improve the sound. Select Sport or Track modes and the car’s exhaust will pop and crackle when you lift off the accelerator.

The only real drawback of the car’s switchable modes is the location of the switchgear, which is located low down by the gearstick. This can make cycling through the various modes a bit fiddly on the move but it does become easier with practice. 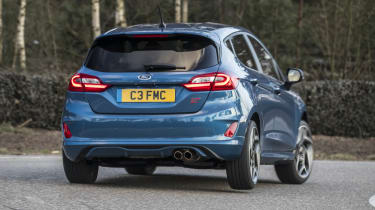 The previous Fiesta ST was more keen to rev to its redline, whereas the new model’s three-cylinder doesn’t feel like it needs to be revved past 5,500rpm – something that owners of the old car might miss. However, keen drivers will enjoy the ST’s delightful short-shift six-speed gearbox, which comes complete with a 'flat-shift' feature. Simply keep your right foot flat to the floor on the accelerator pedal and change gear using the clutch as usual; the car will automatically hold the engine on a limiter between gearchanges. However in our experience the result doesn’t feel too kind to the clutch, so we doubt most owners will use it in practice.

On sale from June 2019, a limited run of 600 Fiesta ST Ford Performance Edition cars get performance upgrades and a distinctive Deep Orange paint, making them hard to miss. While power remains unchanged, a set of lightweight 18-inch alloy wheels (saving 7kg) is fitted, along with coilover suspension that lowers the car by 15mm at the front and 10mm at the back. It can also be adjusted manually by the owner to fine-tune the driving experience, or adjust the ST's handling for track days.