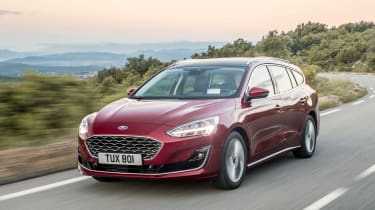 Driver appeal doesn't naturally figure high on family estate cars' 'must-have' lists, but models like the SEAT Leon ST have proven that practicality and handling prowess needn't be mutually exclusive. Fortunately – as with its hatchback sister – the latest Ford Focus Estate offers a sharper and more involving drive than its predecessor.

Based on an all-new 'C2' platform that'll also underpin future models of other cars in the Ford range, the latest Focus was designed to appeal to enthusiastic drivers from the outset. Body stiffness is said to be far greater than previous Focus models, so the suspension has to do less work to keep the car composed. 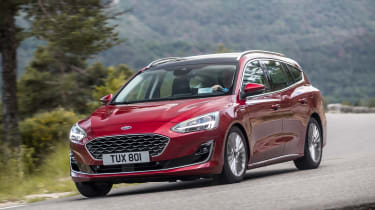 The estate actually has a more sophisticated suspension than the entry-level hatchback – its independent layout has more in common with that used by the sporty Focus ST-Line. Better news still is a clever Continuously Controlled Damping (CCD) system, which uses sensors to fine-tune the suspension depending on steering and braking inputs, and can even adjust to ready itself for imperfections in the road ahead, with the rear suspension 'learning' from shocks the front has just been subjected to. It's available as an option on ST-Line X, Titanium X and Vignale models.

Standard across the range, though, is electric power steering that's claimed to deliver a more direct, responsive feel than before, while the traction control incorporates 'torque steer compensation' and torque-vectoring control to make sure power is deployed in such a way as to avoid unwanted steering movements.

What this all amounts to is an estate car that feels barely any different to the hatchback from behind the wheel – good news, because the Focus is one of the very best handling family cars you can buy. That clever steering is responsive and feels natural, while the whole car feels very well balanced, as well as eager to tackle corners. The ST-Line sits 10mm lower than other models and feels a little sportier as a result, but still manages to ride smoothly over surface imperfections. 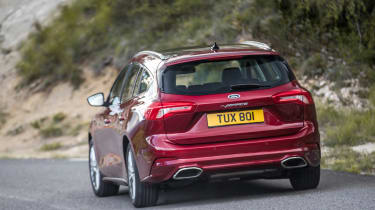 As with the hatchback, the diesel range opens with a 118bhp 1.5-litre, four-cylinder EcoBlue. A six-speed manual gearbox is standard but it also comes with an eight-speed automatic gearbox option. Acceleration from 0-62mph takes 10.3 seconds respectively – although speccing the auto gearbox or choosing any of the Active models makes it a bit slower. The sporty ST-Line and luxurious Vignale are offered with a 148bhp 2.0-litre EcoBlue diesel option. If you can stretch to it, this engine offers a quicker 0-62mph time of between 8.7 and 9.5 seconds, depending on spec.

Ford has impressed with its 1.0-litre EcoBoost petrol engine, as seen in the latest Fiesta and Puma. It's now available with 123bhp or 153bhp and brings a 0-62mph time of 10.3 seconds in 123bhp form. Both boast mild-hybrid technology and 55mpg, but the 153bhp engine also gets you from 0-62mph in 9.4 seconds.