The Focus ST is based on one of Britain's most popular cars, so there shouldn't be too much trepidation around buying one. Safety is particularly impressive, with Ford pulling out all the stops to keep occupants safe, but reliability won't be fully known for some time yet. 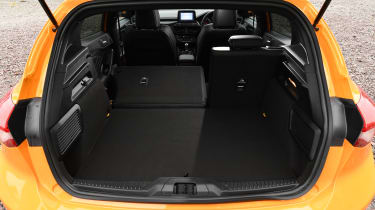 The latest Ford Focus is not only a recent model but it's also built on a new platform for Ford, so it's a little early to predict how reliable it'll be. Lots of its technology is 'off the shelf', though, from its 2.0-litre diesel engine to many of its electronics and SYNC 3 infotainment system. In the petrol ST, the 2.3-litre EcoBoost engine is a development of the motor seen in the previous-generation Ford Focus RS and is also related to the engine found in the entry-level Ford Mustang.

Ford's overall performance as a manufacturer in our 2020 Driver Power owner satisfaction survey wasn't too inspiring, however, coming 24th out of 30 manufacturers. Its models scored poorly for build quality, practicality and comfort, with the SYNC 3 infotainment receiving praise.

The Focus is loaded with safety features, and the standard model has already been awarded a five-star crash-test safety rating from Euro NCAP. It's covered in an array of ultrasonic sensors, cameras and radars to help warn the driver of danger and help them react, or even brake automatically. Lane assist, evasive steering assist and parking aids are all fitted, along with traffic-sign recognition. The Focus ST is also the first of its models in Europe to be offered with a head-up display, helping the driver concentrate on the road ahead.