The petrol Ford Focus ST is thirsty, while the diesel may suit commuters better

The Focus ST is available with one petrol and one diesel engine. The petrol is the driver's choice, while the diesel engine still represents the best choice for motorway drivers and those with long commutes.

The petrol is a turbocharged 2.3-litre engine with the ability to guzzle fuel when driven hard. Switch into its normal driving mode and take things easy, and it should be possible to get close to its official 34.4mpg economy figure. This is pretty similar to the 34mpg of the Hyundai i30 N Performance, while the Honda Civic Type R returns around 33mpg. Economy figures for the new automatic gearbox have yet to be announced. CO2 emissions of 179g/km mean the ST sits firmly at the top of the BiK bandings alongside its rivals, so it's not a cheap option for company-car drivers.

Smaller and more efficient, the 2.0-litre diesel version of the ST should return around 50mpg, while its CO2 emissions of 148g/km qualify it for a slightly lower BiK bandi making it a tempting rival to the Volkswagen Golf GTD and the diesel Skoda Octavia vRS. Both versions of the Focus ST cost £150 a year in road tax. 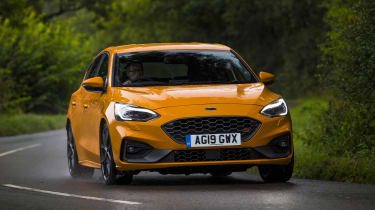 The Association of British Insurers (ABI) gives the two engines very different insurance groups; the diesel should provide surprisingly low premiums, sitting in group 23 out of 50, while the petrol engine will cost a bit more to insure - it’s in group 34.

Every new Ford comes with a three-year/60,000 mile warranty, which is the same as the Golf GTD, but shorter than the five-year/unlimited-mileage cover supplied with the Hyundai i30 N. Ford's warranty can be extended to four or five years in length at extra cost. As standard, one year of European roadside assistance is also included.

Customers can take out a Ford Protect Service Plan to cover scheduled maintenance for an upfront fee or monthly payment. Upgrading this to Service Plan Plus also covers consumables such as brake pads and discs, the clutch, shock absorbers and the exhaust.