So far we've only driven the petrol Focus ST, which driving purists are the most excited about. It's certainly taken a step on in performance because, while the ST has long been the more sensible Ford hot hatch sitting below the barking RS, its power has been upped to match rivals like the Hyundai i30 N Performance - the new kid on the block.

Sitting on an entirely new chassis, Ford has sharpened up the driving experience too, increasing the speed of the steering by 15% compared with the standard Focus models, which is hardly vague in the first place. It's chucked just about every other hot hatch toy at the ST too, including clever front suspension geometry, stiffer suspension settings, a 10mm lower ride height and an electronically controlled limited-slip differential that improves agility and traction.

The ride is firm but there are huge reserves of grip and the ability to dive into corners with a mere flick of the steering wheel. The steering can tug at your fingertips slightly as you accelerate but, according to Ford, a degree of 'torque steer' has been left in to give the car character. The sheer speed of the steering's response also requires a bit of getting used to - it makes the ST incredibly agile, but this can also give the fast Focus a slightly nervous character across a typically narrow, bumpy backroad with a heavily cambered surface.

You can adjust how the ST responds by cycling through four driving modes directly on the steering wheel, and Track is the most hardcore, bringing the ST to life by stiffening its suspension, boosting engine response and liberating pops and bangs from the exhaust. Sport feels suitable for smoother roads, but noticeably bouncier than the standard setting, which is still firm, but soaks up most bumps without sending a shudder through the bodyshell.

A great hot hatch still has to be able to sit in traffic and amble sedately through the supermarket car park, and the ST has modes to make it comfortable doing both those things. We'll have to wait to compare them side-by-side for a final verdict, but first impressions are that the Focus ST has a similarly firm chassis to the Hyundai i30 N, while the Honda Civic Type R's suspension displays a broader range between its softest and stiffest settings. 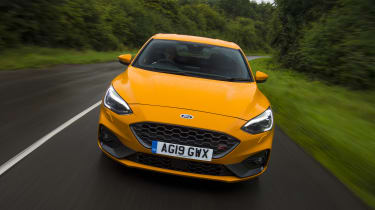 Essentially a less powerful version of the Ford Mustang’s EcoBoost engine, the turbocharged 2.3-litre petrol engine in the ST serves up 276bhp and 420Nm of torque - a big jump from the previous generation. While still some way off the 316bhp Honda Civic Type R, the ST is a few horsepower ahead of the i30N Performance, and way ahead of the 242bhp Golf GTI.

A 0-62mph time of 5.7 seconds is certainly impressive for a front-wheel drive car and the ST has plenty of clever features. Most intriguing for rally fans is likely to be 'anti-lag' turbo technology, recently seen in the Ford GT supercar and F-150 Raptor pick-up. By keeping the throttle open in Sport and Track driving modes, even when the driver lifts off the accelerator, the turbocharger keeps spinning so it can provide full boost when you come back on the throttle. The larger-than-class-average size of the 2.3-litre engine certainly helps with bursts of acceleration, and it's when driving between bends or overtaking that the ST feels most impressive.

In the six-speed manual you can also 'flat-shift' up through the gears without coming off the accelerator, while downshift rev-matching blips the engine as you change down to ensure each gear engages smoothly. Despite all this tech, and the fact it has class-leading torque, the engine isn't the highlight of the car next to the sparkling chassis. That's probably because from anything above 1,800rpm the engine is undeniably effective but simply piles on speed with a flat blare from its twin exhaust pipes.

A new seven-speed automatic gearbox has been introduced for 2020, but Ford is yet to release performance figures. We expect 0-62mph to take a similar time to the six-speed manual. 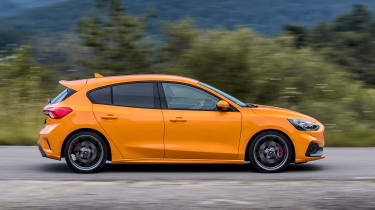 Ford's 2.0-litre EcoBlue diesel gets 187bhp - the most power ever offered in a diesel Focus and 5bhp more than the Volkswagen Golf GTD and Octavia vRS offer. The BMW 120d matches the Focus ST' power exactly, and with the move to front- or four-wheel drive, it's more of a rival than ever. However, even in its most performance-orientated M Sport guise, the BMW is less hardcore and has softer suspension than the Ford.

Acceleration from 0-62mph takes 7.6 seconds, while the diesel ST has a top speed of 137mph. With 360Nm of its total 400Nm of torque on tap from just 1,500rpm, it should also be ideally suited to overtaking.