The Ford Ranger is cheaper to run than before, but only on par with its rivals

The most efficient Ranger emits 179g/km of CO2, while the least efficient pumps out 233g/km. Light commercial vehicles like this are taxed at a flat rate and there’s no CO2-weighted first year payment (under the TC39 VED classification), so you pay £250 a year from the first year of ownership regardless of the emissions rating of the specific version you choose. The exception is the Raptor, which has a much lower payload and therefore no longer qualifies as a commercial vehicle, attracting a much larger road tax bill.

Depending on gearbox (there’s a choice of either six-speed manual or 10-speed automatic), average fuel consumption will range from 34mpg with the 168bhp 2.0-litre engine, while the more powerful 210bhp 2.0-litre diesel can be specified with either a six-speed manual or a 10-speed automatic gearbox and claims 30.7mpg. From early 2020, the turbocharged 3.2-litre diesel engine was discontinued. 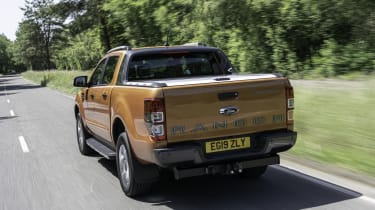 While most SUVs are more economical, the higher running costs of a pickup are partly offset by a lower purchase price. Also, pick-up trucks are classed as commercial vehicles, so business drivers can claim back VAT and Benefit-in-Kind (BiK) tax is lower than for conventional cars, as long as payload exceeds 1,000kg.

This is fine for all Rangers other than the Raptor, which has had its payload reduced to 620kg as a result of the extensive suspension modifications. As a result it’ll be subject to standard company car tax rates, plus private owners will face the road fund license surcharge for the first five years.

Still, apart from the near £50,000 Raptor the Ranger is well priced compared to its rivals. Its strong performance and modern design should ensure it holds its value well and matches the desirability of the Toyota Hilux on the secondhand market.

The Ford Ranger’s insurance groups range roughly from 37E for the basic two-wheel-drive Regular Cab in XL form to 42E for the largest-engined, automatic Double Cab version in Wildtrak spec (all Ranger models and similar pickups are rated on the 30-group LCV scale that starts at 21). No news on the Raptor’s rating, but given its many bespoke components it’s likely to land in or near group 50.

The Ford Ranger is covered by a three-year/60,000-mile warranty, which isn’t as good as the warranties from Mitsubishi (five years/62,000 miles) and certainly worse than that offered by Isuzu (five years/125,000 miles). There’s also a Ford Perforation warranty, which lasts for 12 years from the date of first registration and guarantees the body against rust holes.

The Ford Ranger requires servicing at least every two years or 20,000 miles. Ford has more dealers than any other brand in the UK, meaning the Ranger should be off the road for the minimum amount of time if something does go wrong.