Rivals’ more modern, advanced engines show the age of the Hyundai ix35. It’s not bad for a used car, however

The Hyundai ix35 doesn’t offer a hugely rewarding driving experience; if driving fun tops your priority list, we'd recommend the Skoda Yeti or Mazda CX-5 instead. Hyundai is working hard at the moment to ensure all the cars it sells in Europe are developed on challenging UK roads, but unfortunately, that process either wasn’t applied to the ix35 or wasn’t particularly effective.

Hyundai worked to improve the ix35’s low-speed ride, but it remains rather on the stiff side, and urban driving will often lead to uncomfortable bumps being sent through the interior when you hit a pothole. Unfortunately, despite what seems like firm, almost sporty suspension, the Hyundai is still prone to a strong degree of body lean in fast corners. 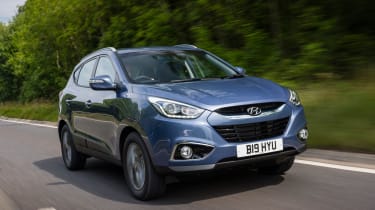 The steering has a peculiar feel to it, too. Hyundai’s Flex Steer system is standard, which helps the ix35 to respond quite directly when overtaking on the motorway. However, the more you turn the wheel, the less accurate the steering feels, which can make negotiating tight bends and roundabouts a bit trickier than it should be. Although mild corners can be taken at speed thanks to lots of grip from the tyres, enthusiastic driving is not the Hyundai’s forte.

Disappointing performance is a big drawback of the hydrogen-powered ix35, as it weighs around 400kg more than the standard car. This means body lean is even more pronounced and the car takes 12.5 seconds to get from 0-62mph. The car doesn't feel massively slow in a straight line because of the consistent and smooth way power is delivered, but other electric cars seem quicker.

You may well find the ix35 petrol engine a little noisy, but the 133bhp 1.6-litre is reasonably perky around town. In fact, it's the fastest-accelerating ix35, accelerating from 0-62mph in 11.1 seconds. However, as speed builds, it can feel a bit strained on more open roads, especially if you have passengers on board. You have to work the manual gearbox quite hard, too, and it’s not as smooth as rivals’ transmissions, either.

The 134bhp 2.0-litre diesel engine is gruff but powerful and you'd be hard-pressed to even notice the four-wheel-drive system that’s mandatory with this engine. It works in front-wheel-drive mode most of the time anyway to save fuel; only engaging the rear wheels if it detects that the fronts are starting to lose grip. The engine noise is only really noticeable at low speeds; it settles down when you're on the motorway, making this ix35 the best choice for long-distance cruising.

However, we prefer the compromise made by the 1.7-litre diesel. It's powerful enough for most drivers and the most economical engine in the line-up. It takes 12.4 seconds to do 0-62mph and its 108mph top speed isn't far off the 2.0-litre's 111mph.