The Hyundai ix35 doesn’t have a fantastic reliability reputation, but if you can find one that’s still in warranty, we’d be less concerned

Drops don’t come much more dramatic than the one experienced by the Hyundai ix35 in our Driver Power owner satisfaction survey – it plunged 69 places to 88th position in 2014 and all the way down to 124th place in 2015.

This should, perhaps, give you pause for thought when considering a used ix35. Granted, it may still have some of its impressive warranty left on if you by after three years or so, but after that, you’ll be on your own, especially as owners rated it 125th out of 200 cars in the 2015 survey.

And while the ix35 wasn’t exactly a star performer, Hyundai as a brand finished our 2015 survey in a respectable 18th place overall and 16th for reliability. 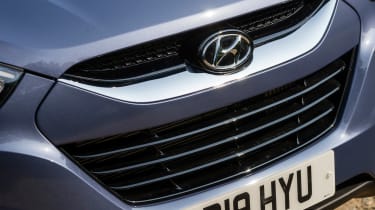 Thankfully, you won’t have to worry too much about safety, as the Hyundai ix35 received a maximum five-star rating when it was crash-tested by Euro NCAP. It scored 90% for adult protection and 88% for child protection, plus it comes with six airbags, electronic stability control and active head restraints.

Even so, we’d expect to see more advanced safety features on the ix35. For instance, lane-departure warning, blind-spot monitoring and low-speed collision alert are absent. You can’t even add them as options. Given that some of these systems are available on the bigger Santa Fe, we’d have expected them to filter down to the ix35 when it was updated in 2013.