Hyundai ix35 engines aren’t the most efficient, but long warranty and good-value servicing make up for it

The Hyundai ix35's engines offered fairly decent performance, but that came at the cost of fuel efficiency. Its rivals usually fared better in this department, using less fuel and emitting less CO2, resulting in lower tax bills. However, although it isn’t the most economical SUV, a long warranty and reasonably-priced servicing will keep your costs down in other ways.

The greenest version of the ix35 is the hydrogen-powered FCEV, which emits zero CO2. However, it was very expensive to buy and there are currently fewer than 20 places in the UK where you can refuel the car with hydrogen. When you do find a filling station, a tank should only cost around £20 and Hyundai says the car can travel for 369 miles if driven carefully.

Of the conventional engines that the ix35 was offered with when new, the 1.7-litre CRDi Blue Drive diesel is the most economical. It comes with two-wheel drive and a manual gearbox. In its most efficient form, with 16-inch alloys fitted, the 1.7-litre diesel returns fuel economy of 53mpg and has CO2 emissions of 139g/km. This translates to a £130 annual road tax bill. 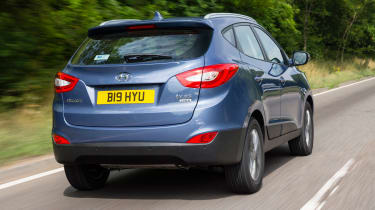 In comparison, the 2.0-litre TDCi engine in the Ford Kuga is more powerful, yet returns a claimed 53mpg and emits 139g/km. The Nissan Qashqai is more competitive still: its 1.5-litre dCi diesel manages a claimed 74mpg and emits 99g/km of CO2, so road tax is free.

If you prefer petrol, there are two versions to choose from. The standard one emits 158g/km of CO2 and returns claimed average fuel economy of 41.5mpg. There’s an eco-friendly petrol, too, also called Blue Drive. This has the same horsepower, but adds a fuel-saving stop-start system – dubbed ISG (Intelligent Stop & Go) by Hyundai. It automatically switches off and restarts the engine when you stop in traffic, cutting emissions to 149g/km and boosting fuel economy to 44mpg.

Those figures aren't as good as you’ll get from the nippy 1.2-litre TSI petrol in the Skoda Yeti. However, the ix35 Blue Drive does reduce your annual road tax bill a little. The petrol engines are available on all models except the top-spec Premium and Premium Panorama.

The third ix35 engine is a 2.0-litre diesel. It’s available with four-wheel drive only and is also the only engine offered with an automatic gearbox. Despite its four-wheel-drive system, the manual version emits 145g/km of CO2 – which is just 6g/km and one tax band higher than the standard 1.7-litre, resulting in a tax bill of £145 a year. That still makes the Hyundai 2.0-litre less fuel-efficient and less powerful than the 138bhp 2.0-litre diesel in the Ford Kuga.

As you’d expect, the automatic version of the Hyundai is less economical than the manual, increasing fuel consumption from 51 to 41mpg and increasing CO2 emissions from 145 to 179g/km on models with 17-inch alloys. This means you’ll be faced with a hefty £230 tax bill every year, too.

If you're interested in the hydrogen-powered ix35, it's worth remembering that the Mitsubishi Outlander PHEV is significantly cheaper and also emits zero CO2 if you run it in electric-only mode for journeys of less than 30 miles.

Given its size and complexity, the Hyundai ix35 won’t cost the earth to insure. Best of the bunch in this respect is the entry-level 1.7-litre CRDi S, which falls into group 16, while at the other end of the scale are the 2.0-litre CRDi four-wheel-drive models, all of which are in group 21.

The Hyundai ix35’s appeal is greatly boosted by its impressive five-year/unlimited-mileage warranty. The balance is fully transferrable between owners, making the ix35 an excellent used buy. Even better, the warranty also includes five years of breakdown cover. Sister brand Kia features a longer seven-year guarantee, but it’s limited to 100,000 miles and includes just a single year of recovery.

Regardless of the service plan you use, your ix35 should visit a dealer once a year or every 10,000 miles, whichever comes sooner. However, rival brands such as Volkswagen and Skoda have variable service schedules that allow you to travel for up to 20,000 miles and two years between visits, which will better suit higher-mileage drivers.