There’s plenty of space inside the Hyundai ix35 and the boot is a good size, if a little tricky to use

The Hyundai ix35 has quite a striking exterior design, but that doesn’t come without compromise to interior comfort. For example, the line that runs below the side windows sweeps up towards the back of the car. That makes the ix35 look sporty, but it also reduces the size of the rear windows, which makes for a rather dark interior. 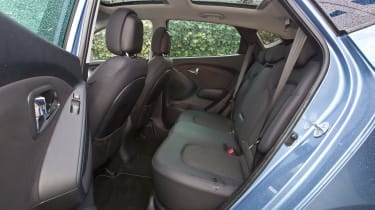 That sweeping line also means that the rear-most roof pillars are extremely thick, which can make reversing tricky. It also increases the size of your blind spot when you’re changing lanes on the motorway. The rear window isn’t that large, either, making it hard to see out the back when reversing.

The ix35 is 4.4 metres long and 1.8 metres wide, which is pretty close to the size of a Ford Focus. However, the Hyundai is obviously taller, which gives you a much more commanding view of the road. Parking sensors are standard on the SE model and above.

The rear doors are a little on the small side, which can make getting up into the back of the ix35 awkward. Once in, there’s a decent amount of room – the floor is flat across the back, too, so even a middle-seat rear passenger should be able to get quite comfortable. However, taller rear-seat passengers may struggle for headroom due to the curve of the roof.

Boot space is good, with 591 litres on offer – way up on the 456 litres of the Ford Kuga or 416 litres of the Skoda Yeti. The boot is well shaped, too, making it easy to load large, square items. 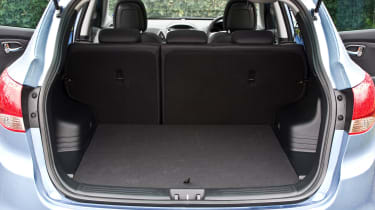 The rear seatbacks fold with a 60:40 split, but there’s no remote boot release on the key fob, as there is with some rivals. The rear seat bases doesn’t fold up, either, so you don’t get a completely flat load space, but the 1,436 litres of room is decent, if slightly smaller than what you get in both the Ford and Skoda with seats down.

The Hyundai also has a host of useful hooks and cubbyholes around the cabin to keep small items from flying around. However, like all high-riding SUVs, the ix35 suffers from a high load lip. This isn’t a particular problem in day-to-day use, but lifting heavier items in can be a bit of a struggle.p;

The practicality of the ix35 FCEV is compromised by its large hydrogen fuel cell, which cuts into boot space, reducing it to 436 litres from the normal 591. Other than that, though, the car matches the other models in the ix35 range.

That makes the ix35 pretty competitive, although the Toyota RAV4 has a higher towing limit. Even so, with its four-wheel-drive traction and powerful 2.0-litre CRDi diesel, the ix35 is a very capable tow car. All models can also cope with a load of 100kg on a roof