The Kia Optima has good fuel economy, while the plug-in hybrid version should be very cheap to run

Previously, the Kia Optima was only available with a 1.7-litre diesel engine – if you wanted anything else you had to look elsewhere. Now, though, Kia has unveiled a petrol-electric plug-in hybrid version, which boosts the Optima’s green credentials further and makes it cheaper to tax. A powerful Optima GT is also due shortly, which will have a 2.0-litre turbocharged petrol engine.

The Kia Optima’s 1.7-litre diesel engine returns 67.3mpg and emits 110g/km of CO2; choosing the automatic gearbox sees fuel economy drop slightly to 64.2mpg. While these figures are by no means disastrous, the Ford Mondeo and Skoda Superb are available with a wider range of engines, the most efficient of which can return almost 80mpg. All petrol and diesel Optimas will cost £140 per year to tax, while the hybrid model costs £130. 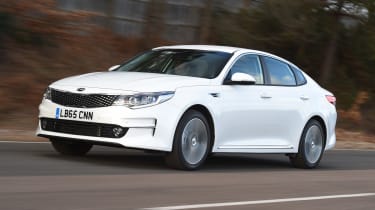 Still, these numbers pale into insignificance when one considers the Optima plug-in hybrid (PHEV). This comes with a 2.0-litre petrol engine and an electric motor, which together return 176.6mpg and emit just 37g/km of CO2.

That’s low enough to escape road tax and the London Congestion Charge and – perhaps most importantly – means the Optima PHEV attracts a company car Benefit-in-Kind rating of just 7%. While it’s fair to say the gulf between claimed and real-world economy tends to be significant with hybrid cars, the Optima PHEV should be a very cheap car to run indeed. Further savings can be found in the batteries, which can be charged up using a conventional socket and have a range of up to 33 miles; this means many will be able to complete their daily commute without using a drop of petrol.

It’s safe to assume the Optima GT saloon will offer similar economy to its SW estate sibling, so expect to see around 34mpg and CO2 emissions of 191g/km if you choose this powerful model. That relatively high CO2 figure means you’ll pay £270 a year to tax the Optima GT under the current system, but be warned if you buy after April 2017, you’ll be taxed under a new set of rules.

Assuming the GT saloon has the same CO2 emissions as the SW model, you paying a whopping £1,200 for the Optima GT’s first year of tax, although the GT saloon only needs to emit 1g/km less of CO2 than the SW estate for that figure to drop to £800. Whichever of those is the case, each subsequent year of road tax will be a more reasonable £140.

Insurance for the Optima shouldn’t be too expensive: the Optima 3 is rated in group 20 (out of a possible 50) while the Optima 2 sits a couple of groups below. The hybrid model will be a little pricier to insure as it sits in group 25, partly because the extra mechanical sophistication means it’ll be more expensive to repair, should anything bad happen.

Kia’s class-leading seven-year/100,000-mile warranty is longer than any other manufacturer’s, although Hyundai’s five-year policy does without a mileage cap.

The Optima is available with fixed-price servicing, which offers great value for money. A three-year plan costs just £329, while a five-year plan is £609. With servicing costs as low as these, the Optima makes a good case for itself in this area.