Ride is harsh, but luxury and a quiet drive are assured in the Lexus CT

The Lexus CT lives up to its maker’s reputation for luxury thanks to upmarket materials and virtually peerless build quality. The seats are some of most comfortable in any car on the market. The actual design of the interior is starting to show its age now, with the Volkswagen GTE offering a more modern and user-friendly dashboard.

The thin seven-inch screen looks good on the CT 200h and F Sport models with the standard fit satellite-navigation system. It now include a new BMW-style rotary dial rather than the old mouse controller that was a bit fiddly and annoying to use. The system isn’t as modern as some of the best on the market, with the graphics looking decidedly low-res next to the displays featured in rivals. 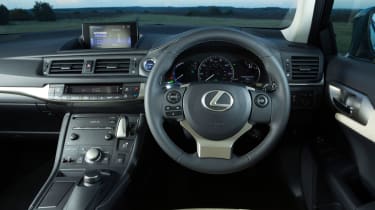 The CT has a quiet, calm and luxurious interior, with the hybrid setup truly excelling by remaining virtually silent when driving at slower speeds. The ride isn’t as comfortable as we’ve become used to with Lexus, though – the firm suspension setup tends to jolt passengers around, especially on rough roads, and it’s still too hard even after Lexus softened it as part of the car’s revamp.

Once you start working the engine hard, it can get a bit noisy, as the CVT automatic gearbox pushes the motor a bit too much, resulting in loud revs.

As befits an upmarket manufacturer such as Lexus, the CT hatchback comes with plenty of equipment as standard. Getting the range off to a well-equipped start is the CT 200h, which has 17-inch alloy wheels, LED daytime running lights and tail-lights, rain-sensing windscreen wipers, a seven-inch screen for the infotainment system and sat nav, a DAB radio, Bluetooth phone connectivity and dual-zone climate control.

For an additional £1,000 a Premium Pack can be specified, which adds front and rear parking sensors, keyless entry, privacy glass and heated front seats along with upgraded seat upholstery. 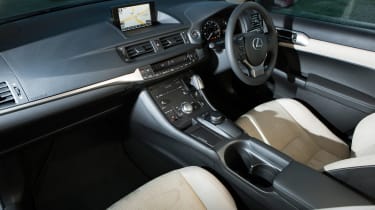 The F Sport model is the most dynamic model of the range, with largely similar features to the CT 200h but with a sportier look. It has F Sport styling and seats trimmed with fabric and ‘Tahara’, plus ‘performance’ dampers.

An optional Leather Pack can be added to the F-Sport model, which includes electrically adjustable and heated leather seats with lumbar support as well as a memory function for the driver’s seat and mirrors.

Much of the equipment included as standard on the higher-spec models is optional on the lower trim levels, but other options include a sunroof, black alloy wheels, adaptive cruise control and a DVD entertainment system.