The Lexus CT isn't especially quick and steering could be better

Lexus makes some bold statements about the Lexus CT, claiming that it’s a sporty small car that boasts excellent fuel economy and low running costs. While the latter two points are true – what more would you expect from a car based on the Toyota Prius? – the performance leaves a lot to be desired.

It drives reasonably well through corners, though it does roll in tighter bends, and the steering is nicely weighted, but you can feel the heavy batteries every time the car changes direction. Since it first went on sale, improvements have been made to its cornering ability, but it’s still a long way from perfect in this regard.

If the promise of sportiness is what drew you to this car, you may also find the steering a bit disappointing, as it doesn’t provide enough feedback to really connect you to the road.

This means that despite a Sport setting that makes the steering heavier, the CT never really feels fun to drive fast on the open road. The Sport setting doesn’t increase the amount of information passed to the driver through the steering wheel, so it doesn’t add more fun. The problems aren’t just limited to the steering and gearbox, either – as with many hybrid models, the CT suffers from sharp brakes that make stopping smoothly more difficult than it should be.

Worse is the firm ride, which makes the car crash, rather than glide, over bumps, and a fair amount of road noise is transmitted inside the car as a result.

The Lexus hybrid is certainly easy to drive around town, with the electric motor delivering instant power to make the CT nippy in traffic and out of junctions, but those looking for a truly sporty hatchback should look elsewhere, at cars like the Audi A3 e-tron or the larger BMW 330e iPerformance. 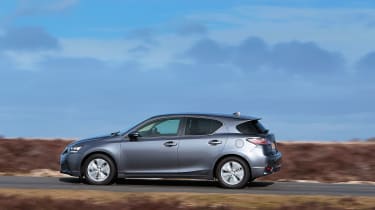 The CT’s 1.8-litre petrol engine combined with an electric motor offers a healthy output of 134bhp, but it feels surprisingly slow and takes 10.3 seconds to get from 0-62mph. It's extremely quiet at low speeds, where it can cover about 1.2 miles on its battery alone, although it's quite hard to drive at acceptable speeds without the engine kicking in.

Perhaps the biggest frustration is the CVT automatic gearbox frequently fitted to hybrids. Accelerate and the revs rise and stay there, unlike cars such as the Kia Niro that have a more conventional automatic gearbox, which makes for quieter and more relaxed driving. The CVT is sluggish, making full-throttle performance rather underwhelming and generally reducing the engine's responsiveness dramatically.