The Lexus CT only comes with one engine option: a 1.8-litre petrol paired with an electric motor for hybrid running. The car is capable of some impressive fuel economy figures, but its technology is starting to age now and there are some more modern alternatives – including the Toyota Prius and a number of plug-in hybrid models – that can better its mpg figures. It’s a shame that when Lexus updated the car in the autumn of 2017, it didn’t move the CT on to the newer powertrain already in use in the latest Prius.

It’s also worth remembering that, as with any hybrid, driving the CT quickly will mean it leans more on the petrol engine for its power, and fuel economy will get significantly worse than the figures quoted. 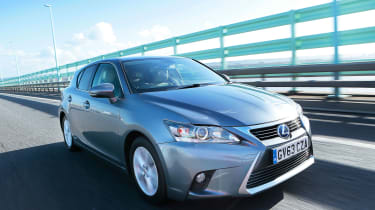 As Lexus is a premium brand, the cost of servicing and parts is likely to be slightly higher than normal. However, thanks to the hybrid system, the CT 200h doesn’t use a starter motor or alternator and there’s no standard clutch either, meaning you won’t ever need to pay for them to be replaced. Unlike diesel cars, the car doesn’t achieve its low CO2 emissions using particulate filters – these are usually expensive to replace.

That sounds impressive in isolation, but the Toyota Prius records up to 83.1mpg with significantly lower CO2 emissions of 78g/km. There's an even more economical plug-in hybrid version of the Prius too – an option that's not afforded to the CT.

All Lexus CTs qualify as alternative-fuel vehicles and so cost £130 a year to tax.

Things are much better for the company car driver though. All models attract a benefit in kind rating of 21% (20% with the smaller 16-inch wheels), which is 2% higher than top-of-the-range Prius but considerably less than you'd pay for a petrol (27-29%) or diesel (27-32%) BMW 1 Series.

Lexus CT models start in insurance group 17, and rise to group 21 for the top-of-the-range Takumi model.