The Mazda2 is quite fun-to-drive, but its engines can feel lethargic

Although the Mazda2 doesn't quite knock the Ford Fiesta off its pedestal as the most fun-to-drive car in this class, it gets reasonably close. Its steering could do with more weight and feel for more confidence when cornering quickly, but it does benefit from Mazda’s ‘G-Vectoring Control’ system. This is said to improve steering feel and precision through varying engine output when cornering.

All models have a slick manual gearbox as standard. Cars with the 89bhp engine can also be ordered with a six-speed automatic, but the manuals suit the Mazda2's eager character best. Watch out for models fitted with the larger 16-inch alloy wheels, as they don't deal with potholes as comfortably as the smaller-wheeled cars. 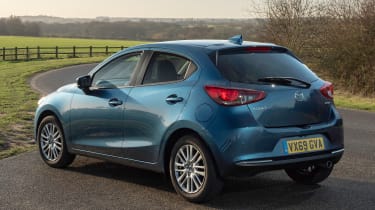 The petrol engine (in its two power outputs) is smooth and fast enough, but work it hard and it starts to sound coarse, with a booming noise making its way inside. The 74bhp petrol isn’t very quick (0-62mph takes 11.7 seconds) and is reserved for the cheapest SE-L model, while the 89bhp model does the same in 9.7 seconds.

At 1.5 litres, it’s a big engine for this size of car but, unlike most rivals, it doesn’t have a turbocharger. At times, you’ll sorely miss it, especially if you’re trying to get up to speed on a motorway, for example. You can tell that motorway miles aren’t its forte; it’s best below about 40mph or so.